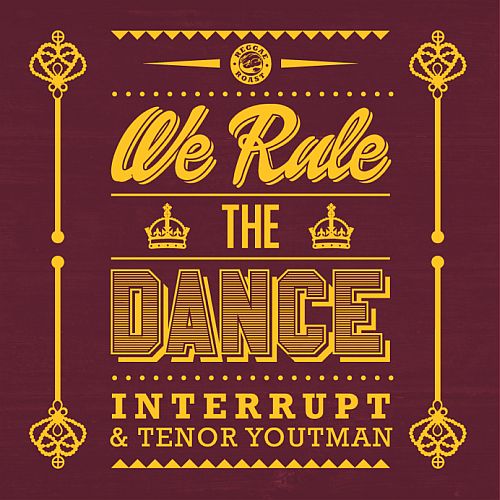 Now on their twenty-eighth release of forward thinking UK Reggae music, Reggae Roast continue with hit after hit. This release definitely follows suit, having already done the rounds on dubplate for many months and set alight dances all over the world. They’ve signed up one of the top up and coming UK producers, Interrupt, and one of the best new MC’s on the scene, Tenor Youthman.

‘We Rule The Dance’ is a deep & heavy baseline bubbler, built to test any soundsystem! It’s a contemporary reimagining of the 80’s digital style pioneered by King Jammy as well as Steelie & Cleevie, which is accentuated by Tenor Youthman’s ‘Nitty Gritty’ vocal stylings. Full to the brim with soundclash lyrics, authentic Casio keyboard licks and airhorns this release is sure to set any dancehall alight.

Interrupt is relatively new to the scene and only starting producing in 2012, however his take on the digital Reggae style of the late 1980’s is some of the best there is. Now based in London, Interrupt continues to provide his own individual upbeat vibe, which features old-school drum machines, bold basslines and colourful synthesizers. Having worked with Speng Bong, Cubiculo Records and Spanish singers Ponchita Peligros & George Palmer, he already has significant hits under his belt and shows no signs of slowing down.

Russian sound system pioneer, singjay and producer, Tenor Youthman, has dedicated his life to the power of the Reggae. A disciple of the “Hill & Gully” style, made famous by Tenor Saw amongst others, Youthman brings a message of love & conscious living through his music. Using his in-depth knowledge of Reggae & Soundsystem culture Tenor provides distinctive energy & style to everything he’s involved with and is fast becoming one of the most in-demand mic men in the world.

Reggae Roast is building a formidable catalogue featuring some of the most exciting artists in the UK and beyond. Key players in the resurgence of the UK Roots scene over the past 5 years, they are a leading light in the new generation of dub music. Look out for plenty more releases in the 2016 from the likes of Vibration Lab, Adam Prescott, Brother Culture and many more.