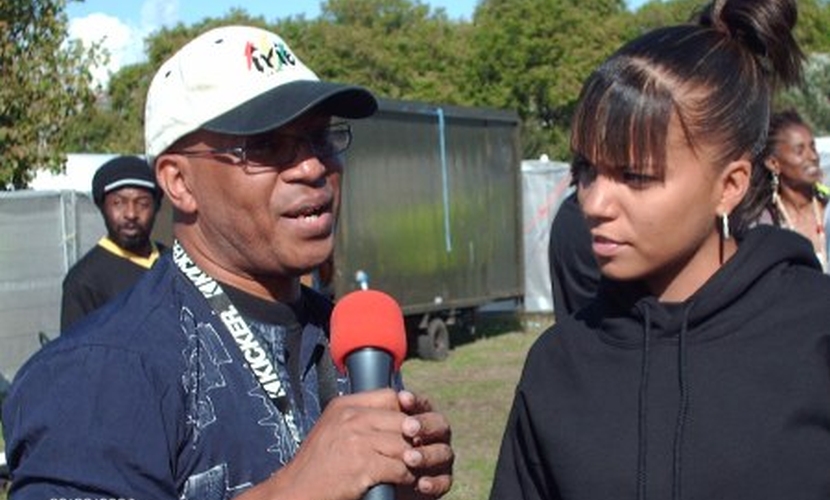 Norman Gentles Music Journalist of 27 years was awarded The lifetime Achievement Award for services to Reggae music at Silk Promotion’s Annual North London Community Award in London on Saturday. The UK’s North London community turned out in abundance to pay tribute and honour those who made a difference to one of the largest Black communities in the UK over the past year.

The diverse award with categories such as The Best Dressed Male/Female Dance Supporter, Best Barber Shop, Best Restaurant, Best Birthday Bash and Best Young Sound System, Best Sexy Female proved to be one of the most popular category with the large audience. Tony Matterhorn picked up the award for Best International sound.

Entertainment on the night was provided by up and coming artist as well as established acts Zulu, Ras Naldo and Gappy Ranks north London’s fastest rising star who thrilled with his lyrical dexterity.

The night however belonged to the Journalist from Chudleigh Manchester the former Knox College (Jamaica)Southall College of Technology (London) student and graduate of City University London.

Norman Gentles currently host The Musicalheatwave TV show which is the fastest growing music magazine programme in the UK the show can be seen in Europe and North Africa on the Sky Network BEN TV.

Norman G as he is popularly known in the reggae business is celebrating 27 yr as a music Journalist. Norman G has The honour of being one of the original presenter,producer/researcher for BVTV the first Black owned TV station in the UK where he worked for ten years and established the programme Profile which made an impact with some very exclusive interviews with the stars of the dayMaxie Preiest, Beres Hammond,Arrow, Buju, a very young Jah Cure and Luciano’s first UK TV debut the creative and imaginative interviewer was one of the first UK journalist to report on the Air Jamaica Jazz and Blues and was at Midem 1997 when Jamaica rocked Cannes..

Norman g is the longest serving presenter on the first multicultural radio station in europe, he is coming up to his 14 year on spectrum radio where mikey dread campbell once presented a show which was a training ground for some of the top presenters who he supported with training in presentation/interviews some of whom went on to choice fm/radio one extra and even back to the caribbean to work on radio stations . Norman g has worked tirelessly within this business also in the background giving advise and encouraging those around him,he has been guiding artists about their rights developing talents and showing the positive side of his country.

After completing his City and Guilds in Radio and TV Technology he then switched to Journalism and worked as a Freelance Journalist and has contributed to sleeve notes for reggae/soul album covers before moving to the jamaican gleaner as entertainment writer for the weekly gleaner in the uk .also for beat magazine in its early inception.

Norman g worked as a writer for jet star records contributing to the sleeve note of several of the company’s release including the big people cd series. He recently ventured into the music video making market as well as making tv programmes.

NORMAN G Gentles is the CEO of MUSICALHEATWAVE VIDEO PRODUCTION COMPANY and also the founder of THE MUSICALHEATWAVE RADIO /TV SHOW ON YOUR RADIO AND SCREENS EVERY FRIDAY NIGHT 10PM AND SUNDAY MORNING 10AM B E N 148 SKY NETWORK UK Europe/North Africa.