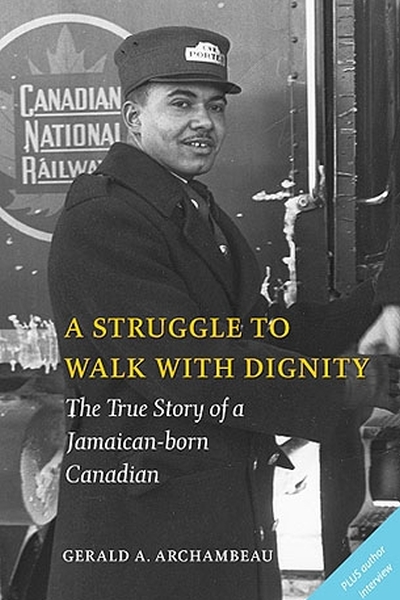 ‘A Struggle to Walk with Dignity’ Gerald Archambeau’s remarkable and courageous life along the frontiers of race relations in Jamaica, Canada and the United States forms the core of this autobiography of a man who met discrimination with dignity and blazed a new path for equality in the process.

In the telling, Archambeau takes readers into places they would not otherwise know about, where the experience of black people has transformed, and ultimately enriched, North American life – from the last days of the golden age of North American railways, to the jazz clubs of Montreal, through the growth of civil aviation and those who work in the industry, to the personal trials and family challenges in times of cultural and social change.

A reader will find humour as well as important social history in this true-life story. We travel with Archambeau as he encounters prime ministers and human rights officers, and as he challenges discrimination in the work place and even within the black community itself, which he calls “the same old soup warmed over”.

Gerald Archambeau’s life traces the leading edge of race relations in the workplace and shows how personal courage combined with a full repertoire of responses – including a strong fist, detailed record-keeping to document discriminatory practices, and dogged persistence in addressing the authorities – helped pioneer a new harmony built upon mutual respect.

“His experience as a black immigrant arriving in Canada in the 1940s touches themes central to the country’s identity. In the face of the racism he encountered, Archambeau never lost hope that positive change was possible and that he would assume a role in affecting such change.” – Don MacLean, Ottawa Life

“This book is a must read for any new immigrant coming to Canada in search of a better life and how to avoid the pitfalls that often befall them. Gerald Archambeau, with his personal testimony and a strong sense of faith in the human spirit, uplifts, encourages and teaches how to ‘walk with dignity’ when all the cards were seemingly stacked against him.” – Sharleine M. Haycock, Toronto

Author Gerald A. Archambeau, born and raised in Jamaica and Montreal, worked in a variety of jobs in Montreal and Toronto. Today he lives with his wife Marion in St. Catharines, Ontario.