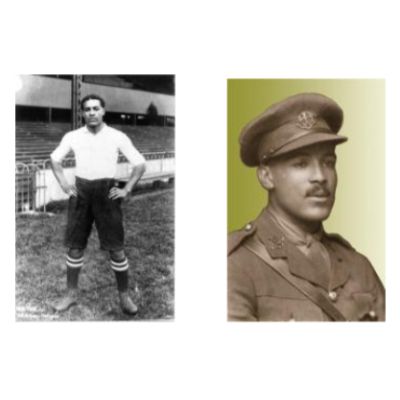 "I was out playing football on Hackney Marshes and a scout was there from Clapton Football club. He saw me playing and thinks I should have a trial with them." Walter Tull August 1908

"What a season we have had. We’ve won the London Senior Cup, London County Amateur Cup, and now the Amateur Cup." Walter Tull April 1909 – weeks before being signed by Tottenham Hotspur

When Walter Tull stepped on to the hallowed pitch at White Hart Lane on 1stSeptember 1909 he became the first professional outfield black player to play in England’s premier football division. Within eight years of making his debut for Tottenham Hotspur he would become the first black British army officer in “the war to end all wars.”

Sadly, a year later he would make the ultimate sacrifice for his country.

As part of the international centenary commemorating the First World War, the Nubian Jak Community Trust in partnership with the Heritage Lottery Fund, The Professional Footballer’s Association and Haringey Council have organized a Walter Tull Memorial Tribute, which includes an under 16s football tournament bearing his name, a inter schools WW1 theatre performance, and the unveiling of a blue heritage plaque earlier in the day at the site where Walter Tull lived while playing for Tottenham Hotspur.

The blue plaque tribute is open to the public and will take place at Noon on Tuesday 21st October at 77 Northumberland Park, Tottenham, N17 0PG.

It will be unveiled by former Spurs player Garth Crooks in the presence of past and present footballers, members of the public, and media.

(Food and refreshments available.Matinee performance of WW1 drama “From sea to land and Sky2pm –3:15pm)