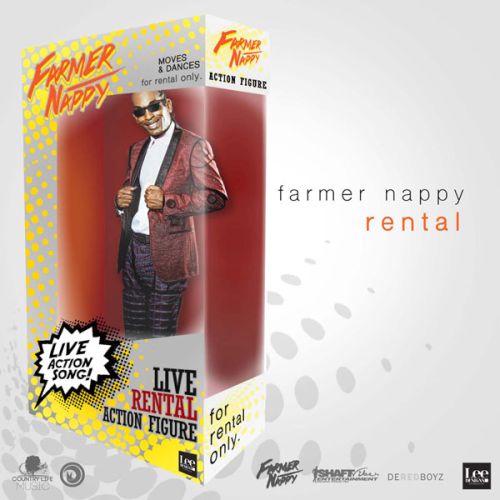 Soca star Darryl “Farmer Nappy” Henry blazes with his new hit ‘Rental,’ available worldwide from all major digital retailers on October 16, 2015, with pre-order available now, from FOX FUSE. The acclaimed Trinidadian singer and songwriter delivers the very best that soca and calypso music has to offer and continues that rich tradition with “Rental.” This marks his first official release for the 2016 Trinidad Carnival season, from his own label Country Life Entertainment.

Celebrating over 30 years at the forefront of soca and calypso, Farmer Nappy has placed second twice and third once in the International Groovy Soca Monarch Competition (for “Chippin,’” “My House” and “Big People Party,” respectively). In 2015, he was crowned Calypso Of The Year for the massive success of his groovy blockbuster “Big People Party,” which continues to be a soca anthem globally.

“Coming off huge fan favorites like ‘Big People Party’ and ‘My House’ from the past two years, I challenged myself to maintain that standard,” reveals Farmer Nappy. “I always say if it’s not broke, don’t fix it, so I went back into the studio with my long-time production team De Red Boyz and we cooked up ‘Rental.’ First I gave you a big party, then I gave you my house, and now I give you a rental so you all have someone to dance with.”

Farmer Nappy teams up again with Barbadian hit-production collective De Red Boyz for this thrilling tune, which paints the provocative picture of a guy being rented by a lady as her wining or dance partner for a fete (party). The same catchy hooks and groovy formula proved successful for Farmer’s previous monster jams “Big People Party,” “My House” and “Chippin,’” all crafted by De Red Boyz, who have been instrumental in propelling Farmer Nappy as the face of groovy soca music.

Farmer Nappy is currently touring across the globe and will take center stage at the 2016 Trinidad Carnival with his very own band, De Red Boyz Band. This is another ambitious collaboration with famed producers Scott Galt (Trinidad-born) and Mikey Hulsmeier (Barbados-born), who make up De Red Boyz. Teaming Farmer’s unbridled talents with those of De Red Boyz is a perfect musical marriage in studio and now on stage.

Farmer Nappy and De Red Boyz Band officially launched in New York City in April 2014, when Farmer released his Big People Party album to fans internationally at famed NYC music venue SOB’s. They have enjoyed numerous sold-out performances under their belt, from touring throughout the Caribbean, North America and Europe during 2015. The four-piece band consists of bass, drums, keys, guitar and backing vocals.

With his new soca anthem and ultra-talented band in hand, Farmer Nappy is armed to keep his unique brand of soca and calypso music fresh, as he takes on Trinidad Carnival 2016 in style. Visit FarmerNappy.com for more details on this electrifying entertainer.