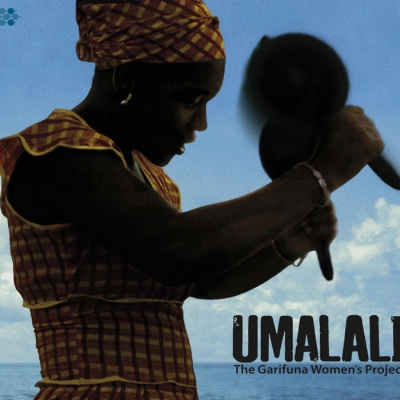 Bearing the Stories of Their People in Songs of Joy, Sorrow, Strength and Beauty

Umalali The Garifuna Women’s Project is an album overflowing with stories. There is the story of how it was made: a ten-year labour of love that started with five years of collecting songs and discovering striking female voices, followed by recording sessions in a seaside hut, and ending with exquisitely detailed and subtle production wizardry. There are the stories told in the songs: of hurricanes that swept away homes and livelihoods, a son murdered in a far-off village, the pain of childbirth and other struggles and triumphs of daily life. There are the personal stories of the women who participated in this magical recording project: mothers and daughters who, while working tirelessly to support their families, sing songs and pass on the traditions of their unique culture to future generations.

Umalali is also the story of a young, innovative music producer from Belize whose meticulous and inventive craftsmanship has resulted in what will surely be recognized as one of the most uplifting and moving albums in recent memory. Blending the rich vocal textures of women from the Afro-Amerindian communities of Belize, Guatemala and Honduras with echoes of rock, blues, funk, African, Latin and Caribbean music, Umalali is an entrancing journey into the heart and soul of women whose strength, hard work and perseverance provide the bedrock of their community.

Umalali: The Garifuna Women’s Project, which will be released by Cumbancha on April 7th, 2008, is a groundbreaking album that invites the listener behind closed doors into a fascinating musical world that has remained largely unexposed until now. The project was produced by Ivan Duran, the mastermind behind Andy Palacio & The Garifuna Collective’s album Wátina, one of the most critically acclaimed albums of any genre in 2007.

The album has added poignancy with the sudden death on January 19th of Andy Palacio, one of the greatest champions of the Garifuna culture. The international success of Palacio’s album Wátina had brought great attention to the exceptional musical expressions of the Garifuna community, descendants of the intermarriage between escaped African slaves and indigenous Carib and Arawak Indians. An essential advisor, mentor and champion of the Garifuna Women’s Project, Andy had invited singers from Umalali to participate in the 2008 concerts of the Garifuna Collective. Instead, the tour is being converted into a tribute to Andy Palacio, and the women will raise their voices alongside other Garifuna talents in praise of a man who tirelessly promoted the global awareness and safeguarding of his people’s culture. For an updated list of tour dates, visit Cumbancha.com.

Lavishly packaged with a deluxe digipack and expansive 36-page booklet, that features full lyrics, detailed song descriptions and gorgeous photographs, Umalali: The Garifuna Women’s Project also includes extensive bonus material. The enhanced CD includes numerous bonus tracks, slideshows, and over 30 minutes of exclusive videos that give a greater insight into the making of the project and the stories of the women that participated in this remarkable project.