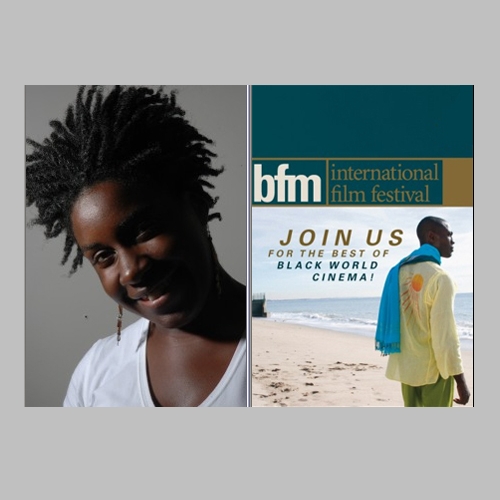 The celebration of the 10th anniversary of the BFM Festival started this weekend. It’s the largest festival celebrating the work of Black film makers in the UK and is one of the most important. Since its beginnings in 1998 it has gone from strength to strength and is now screening at (amongst other venues) the British Film Institute at Southbank until Monday the 17th November. It’s a new venue for them and the festival itself is taking a new direction by showing predominantly British work.

They also have a fresh faced festival director, Nadia Denton, who has been working with the BFM Festival since it’s inception but this is her first year as director. She seems to be a perfect fit, with her previous experience of running a film club at the BFI. But it’s the choices about the films that she has made that really shows how carefully Nadia has considered everybody’s needs. She’s made lots of exciting choices and took a few minutes out to tell itzcaribbean about what they are.

“I was in contact with an African Caribbean consultancy group (through the film club) who wanted to increase and diversify the audience at the BFI. It worked from there! It seems the aim is mutual and this gives the festival a chance to widen its audience too.”

But a wider audience could be a dangerous thing; unless films hold a very generic message (which most of Hollywood films do) you are fear of loosing audiences. Cinema is a personal experience, although you rarely go to the cinema on your own, there is a connection between the movie and you that is uninterrupted for around an hour and a half. How will the BFM Festival , now it has the platform to acquire new audiences, to touch more people and to tell a wider range of stories, still ensure it caters for its faithful viewers? I asked Nadia what the term black cinema means to her and what she hopes it will mean to others.

“Typically filmmakers don’t think they are making a film for black cinema, they have various reasons for making (the films), it’s about their experiences, those experiences can mean something to a variety of people.”

This is evident in the wide range of films on offer in the programme including a film about the Aboriginal experience of Hip Hop to one about the Wu-tang Clan and films like Henry Chalfonts’ critically acclaimed from Mambo to Hip Hop. Nadia has chosen a selection of films that are necessary to the genre but she’s also gone down a more wide reaching route and included stories about sexuality, one shot on plantation in Trinidad, another about a West Indian cricket player and even a film about a not so typical black family Christmas which is former Eastenders actor Sylvester Williams’ directing debut. All films have a common link, they are all stories that are important to the creators, ones that they think is inspiring and integral for us to hear.

Nadia continues “Black film makers want to tell human stories that normally get missed out. We want to understand daily life. Hollywood and more mainstream films cater for mass – we are hankering for something that caters for us, that shows a more human vantage point…There are so many aspects of black cinema that we see that are obvious, like gun or knife crime. ”

It seems Nadia has carefully considered what is important to us, moreover the films she has chosen should be seen as an inspiration to us all. To me it says that we are all unique, we all have a different perspective and it’s that individual perspective that makes these stories interesting.

If you want to be inspired by film and touched by human stories, screenings are at BFI Southbank, the British Museum, the Institute of Contemporary Arts, Rich Mix and Bernie Grant Art’s Centre.

Nadia wanted to thank the festival sponsors for al their support. So thank you to the Mayor of London, the BBC, Shooting People, Kodak, Ilab and many more for making this happen.

For more information on the films on the programme, check out BFM Festival