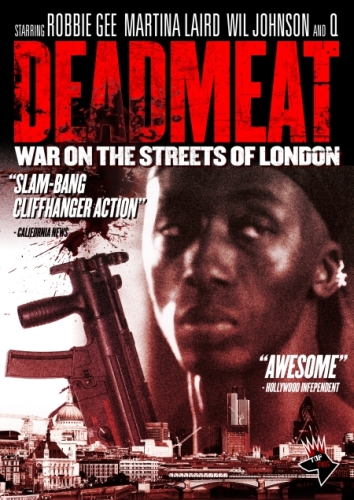 It is a dark time on the streets of London. An American serial killer “The Cyber Vigilante” is tracking down victims.

Clarkie (Q) has just been released from prison. His brother Bones (Brian Bovell), a rising internet artist and entrepreneur has just bought a designer house in Notting Hill and has a new girlfriend, Melanie (Jo Martin), the lawyer who defended Clarkie. Froggy (Roger Griffiths) a friend of the two brothers tells Clarkie that Melanie and Bones set him up to go to prison.

When Bones is found dead under mysterious circumstances, Clarkie embarks on a desperate quest to solve his brother’s murder. Froggy thinks that Clarkie is doing this to cover up his own tracks, as Clarkie is the prime suspect for the murder. Four Years Later…

Melanie who is now heavily pregnant tracks Clarkie down, he is living in Woolwich, south east London. She gives him a vital piece of evidence that she has just found, a clue that will help him solve the case. Clarkie travels to Cricklewood, North West London and searches for the gang that killed his brother. He tracks them down with the help of an undercover cop, and calmly takes his revenge.

A detective, Clayderman (Martina Laird), starts her investigation into the triple gang killings, but is frustrated when two of her undercover officers are caught up in a store robbery. Jamal, a fourteen year old boy is a key witness to the killings; however, he guards a dark secret.

Shot in 12 days, on a low budget, it is truly an independent movie. It features a music soundtrack of some of the UK’s rising stars. The film sold out in under three weeks at recent screenings at the Tricycle cinema in Kilburn.

The story is adapted from Q’s best selling novel Deadmeat. Which he originally sold out of the boot of his car and at nightclubs before it was picked up by a major UK publisher. It has sold over 20,000 copies.

Deadmeat the movie introduces the world to the streets of London and the characters that give life to various neighbourhoods of Woolwich, Ladbroke Grove, Notting Hill, Kilburn and Cricklewood. The themes of Love, Betrayal, and Revenge are explored to breaking point.