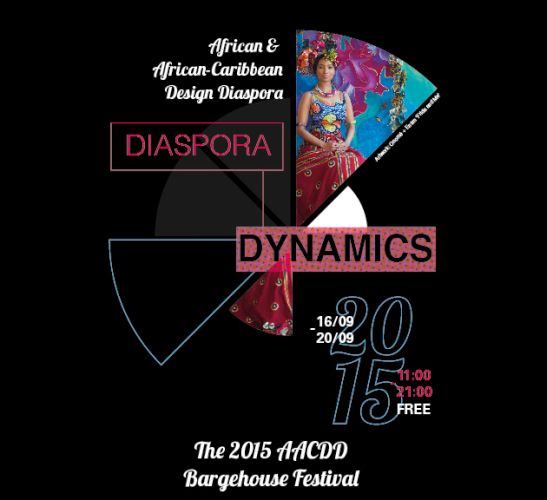 Celebrating its sixth year the African and African-Caribbean Design Diaspora (AACDD) Festival returns to the Bargehouse overlapping with the opening of the London Design Festival.

As the only non-commercial event of its kind, the AACDD Initiative has evolved into a serious platform for the outstanding creative talent and diversity of the UK’s largely unrecognised and underrepresented community of artists and designers of black and mixed race origin.

Launched in 2010 with co-funding from the Arts Council England, the Festival has been funded by the London based British European Design Group since 2013 – generously and actively supported with time and effort by AACDD artists and designers, as well as the wider community, who contribute to its continued existence.

Artist/designer Abi Wright, who is also responsible for the AACDD’s art direction and visual appearance, has been curating the Festival since 2014, which has developed its own and unique dynamism, providing and sustaining a mainstream base for its participants.

This exceptional Initiative must become an undisputed and integral component of the British art and design scene. Not only does the AACDD enrich the UK’s multicultural society with its artistic strength and conviction, it also celebrates the unquestioned professionalism and originality of black and mixed race artists living and working in London and the UK as well as in the Diaspora.

Follow us online for further details about our events during the London Design Festival.
THE 2015 AACDD BARGEHOUSE FESTIVAL Wednesday 16 – Sunday 20 September 2015

Seminars
Individual Programmes to be announced