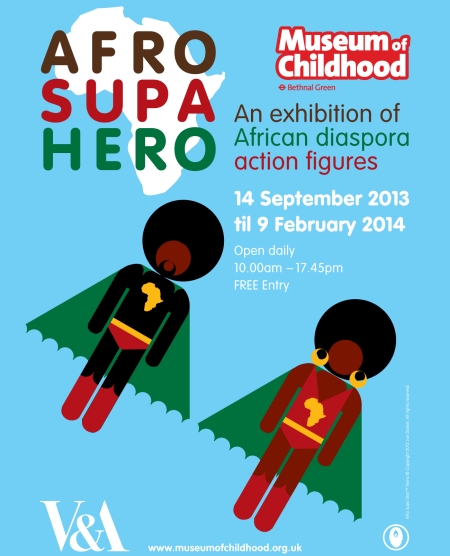 Afro Supa Hero is a snapshot of a childhood and journey to adulthood, shown through a personal collection of pop cultural heroes and heroines of the African diaspora. Jon Daniel’s action figures, comic books and games offer an insight into the experience of a boy of African Caribbean heritage growing up in 1960s and 1970s Britain, in search of his identity. The display opens at the V&A Museum of Childhood on 14 September and runs until 9 February 2014.

“I hope my collection will add another voice to the Museum’s displays by providing an insight into my own childhood. It highlights the fascination with African American culture experienced by many of my generation, who could not find the cultural icons or representations they desired on these shores.” Jon Daniel

Growing up in East Sheen, southwest London in the 1960s and early 70s as the child of West Indian parents, Jon Daniel felt there was little in British culture that he could relate to. Any positive black role models came from the West Indian culture of his family and from the United States, with its conscious Black Pride, the civil rights movement of the 60s and the funkiness of the 70s. On visits to America he found everything ‘bolder, blacker and better’, and cartoons like The Harlem Globe Trotters, films like Shaft and Car Wash, and particularly p-funk, soul and R’n’B music, all had a profound effect on him.

In his late twenties Jon began to collect, prompted by an article in The Face magazine featuring a Malcolm X action figure, created by Olmec Toys in New York. His collection focuses on action figures as, for Jon, these most strongly embody the era. In the display Meteor Man, Mr T and Lieutenant Uhura stand alongside real-life icons Muhammad Ali, Martin Luther King and Nelson Mandela. The highlight for Jon is the 1975 Shindana Super Agent Slade action figure, modelled on Richard Rowntree’s private detective character Shaft and highly sought after by collectors. Also on show are games, and comics including Black Lightning, The Falcon and Lobo, one of a two issue series featuring the first leading African American character in the genre.

Click here to find out more or make a contribution www.museumofchildhood.org.uk

Moon on a Rainbow Shawl back for 2014