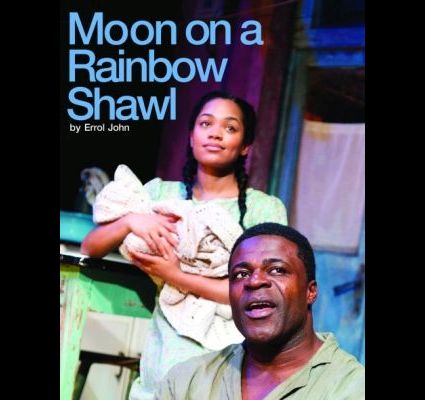 Theatre production of Moon on a Rainbow Shawl back in 2014

Talawa Theatre Company in association with the National Theatre present Moon on a Rainbow Shawl by Errol John. 3 February – 5 April 2014

Artistic director Michael Buffong and Talawa Theatre Company revive the acclaimed 2012 National Theatre production of Errol John’s Moon on a Rainbow Shawl back in 2014 for a tour of the UK in 2014. Launching at The New Wolsey Theatre in Ipswich on 3 February 2014, the production will visit Leeds, Birmingham, Malvern, Oxford, Cambridge, Richmond, Bath and Nottingham.

For the teeming populace of Old Mack’s cacophonous yard in Port of Spain, Trinidad, it’s a cheek by jowl existence lived out on a sweltering public stage. Snatches of calypso compete with hymn tunes, drums and street cries as neighbours drink, brawl, make love, look out for each other and crave a better life. But Ephraim is no dreamer and nothing, not even the seductive Rosa, is going to stop him escaping his dead-end job for a fresh start in England.

Set as returning troops from the Second World War fill the town with their raucous celebrations, Errol John’s MOON ON A RAINBOW SHAWL depicts a vibrant, cosmopolitan world that is as harsh as it is filled with colour and warmth.
Tour dates and venue information to be announced later this year.

"I was spell bound… one of the 20th century’s great neglected plays." The Times