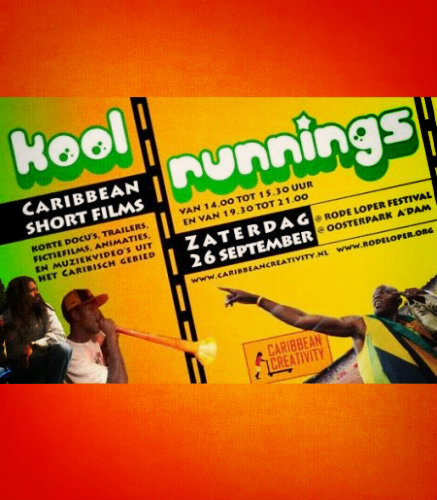 On Saturday September 26 the Caribbean Creativity Foundation will present two unique programs of short films from the Caribbean as part of the Rode Loper Festival in Amsterdam, the Netherlands. From 14.00-15.30 hrs and from 19.30-21.00 hrs a wide range of productions will be screened at the Oosterpark, from documentaries and trailers to animation films and music videos. Together they represent the diversity and quality of the current media landscape of the (Anglophone) Caribbean – a region where a new generation of filmmakers has arrived. Armed with a digital camera they document the rich stories from the Caribbean and the Caribbean diaspora.

In Jamaica, ‘runnings’ means ‘current affairs’, and that is exactly what the selected short films will offer you. All the productions are original and current, and all topics varied and ‘Kool’. In the short documentary Brooklyn Racine (2009) we for example follow a young group of Haitian immigrants who have taken their ancient music (rara) from the Caribbean hills and reinvent it on the streets of Brooklyn, while the T&T animation Small Thing Mentality (2009) explores the typical Caribbean phrase ‘small thing’ and shows how it is really a ‘big thing’ for a person under pressure. And in One Cup of Coffee (2008) we take a look at the fair trade coffee plantation of Rohan Marley, son of Bob Marley, in the Blue Mountains, Jamaica.

Jamaica occupies a prominent position in our film program. In Jamaica many music videos are being produced (of which we will show several, also from other Caribbean countries), and the island has also brought forth the fastest man alive: Usain Bolt, the ‘Kool’ Jamaican sprinter who astonished everybody with his world records at the Beijing Olympics and Berlin World Championships. Images of Bolt are thus indispensable to our showcase of Caribbean short films at the Rode Loper Festival.