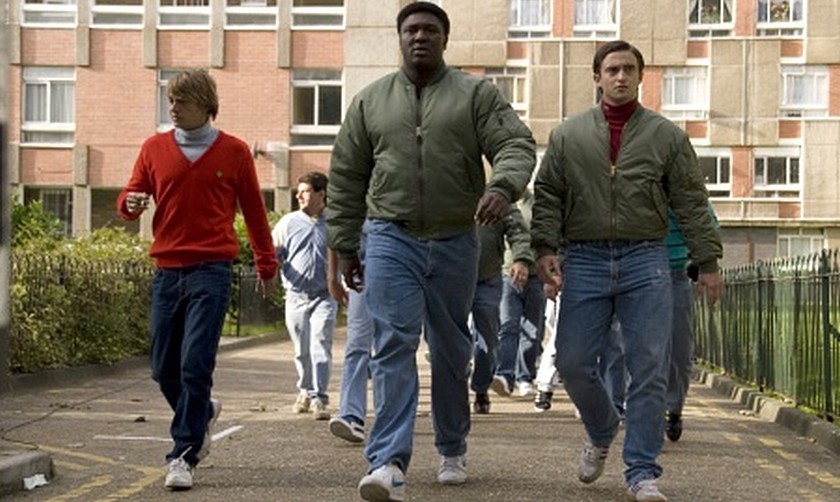 The story of Cass Pennant begins with a bang, literally.

The film opens as Cass is gunned down in an attempt on his life before flashing back to 1958 when a black Dr Barnardo’s boy was adopted by an elderly white couple in Slade Green, Kent.

Although the film is based on his autobiography Cass, for many years one of the most feared football hooligans in the country, always saw his life as a movie.

For his first feature film, director Jon S. Baird was looking for a story that hooked him from the very beginning. “Cass gave me his autobiography to read on the train and by the second chapter, I was absolutely lost in his world,”says the Aberdeen-born film maker. “No one could say he’s the most sophisticated author in the world, but Cass writes in pictures, he talks in pictures and the film was immediately taking shape before my eyes.”

Cass agrees: “I’m not an educated author but people say my simplicity is my virtue, so that’s how I told my story. My life is the story of a certain section of British society, about race, class, music and fashion and friendships that cut across those divides."

Such is Cass’ reputation, however, that Baird was initially wary of approaching him. “You look up at this huge guy and every thought runs through your head: this is a big man, very intimidating, dangerous. I was overawed by his charisma though – it was like the Keyser Soze effect. But Cass can adapt for every occasion.”

Baird also felt a strange connection to the Cass story because his grandmother was a key figure in the Dr Barnardo’s charity movement. He recalls his childhood of being sent out in the Scottish winters to shake his collection box outside supermarkets. “When I realised Cass was a Barnardo’s boy, it seemed like this was the story I’d been collecting for all my life,” says Jon. Writing the film script required the director to be introduced to Cass’ close-knit world. It became a story of mutual trust, with Baird attending West Ham football matches for a whole year to meet and get to know the notorious former ICF members. “The nod from Cass opens up a whole world,” says Jon, “but I was apprehensive about stepping into it. But he couldn’t have done this without me and I couldn’t have done it without him. He was there every day on set.”

Not only did he feel that the main narrative ripe for a big screen story but the people Jon met when hanging out in Cass’ world were immediate candidates for characters. According to Jon, every face told a story. “One of my first entries to that world was a big boxing night at the Hilton in the West End,”remembers Jon. “There were all these East End types there and I just soaked it all up. I couldn’t believe the look of these men and women – it was as if they were straight out of a movie.”

Jon and Cass tried to put as many of these “real” people in the film as possible. Cass himself had been an extra and a “consultant” on previous football hooligan movies such as Football Factory and Green Street, so he was familiar with the concept of getting local faces into the background and how it helps the film crew become accepted in the areas and communities they are filming.

“For me, a film only works if it’s authentic,” says Cass. “The clothes, the music, the locations, they’ve all got to be as true to life as possible, so I got as many real people from my life to be around as I could.” Sharp-eyed audiences can spot cameos from boxing legend Frank Bruno, West Ham scoring legend (on and off the pitch) Frank MacAvennie and World Champion East End boxer Charlie Magri.

Having authentic extras also helped in sometimes unexpected ways. In a key scene when a gangster, played by Tamer Hassan, enters a well-known watering hole brandishing a shotgun, Cass didn’t need to give out many acting lessons. “Everyone there knew what it was like to have a gun go off,” he says with a huge laugh. “From the old geezers to the barmaids – they’ve all experienced it in real life, so I told them to just do what they did when it was for real.”

Although the film is about one man’s colourful life, there’s no escaping that some of Cass’ activities have not found favour with the authorities. Many of his associates have been part of the East End underworld; he was a ring leader for many notorious hooligan fights and instances in the 70s and 80s. He spent three years in prison and was, as the film makes clear, the victim of an assassination attempt, an event which made him turn his life around.

“I think we’re just coming into a period now when there’s enough time and distance from the events of the past,” says Jon. “The film’s more a story of one man trying to get accepted and be respected but the only way he knew was with his fists. That’s what we hope to show – it seeks to understand the man, and I don’t think it glamourises him or his life, at least no more than American gangster films have for done for ages.”

Cass is understandably proud that his life is up there on the big screen. “The film is an unrecorded social history,” he says, with a clarity one might not expect from a man labelled a thug by the press. “With a bit of distance now, we can see that it wasn’t just about mindless fighting but that there was a whole culture to the life, a fashion, a music.”

“But there’s also a change that’s happened to Britain, in terms of racism laws and political correctness – it’s a completely different world here now to the one I was born into.”

Neither Jon nor Cass believe their film could be accused of encouraging the return of football hooliganism. “No way can it go back to how it was,” says Cass. “Arrest figures haven’t gone up since Football Factory or Green Street or since I published my books. Our film is about showing how things changed through the 70s and 80s. People can seen that that was then, this is now and it sits comfortably with them.”

According to Cass, the younger generation are keen to find out about what came before them because stories such as his have passed into local folklore. “I’m not saying they were heroes at all, but on a local level, you’re talking about larger than life people who touched many people’s lives,” he says. “You go into any community in Britain and they’ve all got these strong characters and street legends. And they were known throughout their whole communities – six days of the week, they weren’t fighting in football grounds, so they were mixing with local people in pub scenes and club scenes and everyone will have stories to tell about these men.”

The British actor appearing in his first lead role as Cass is Nonso Anozie, a young London actor who’s appeared in Atonement and Mike Leigh’s Happy-Go-Lucky. “The hardest thing for him was to get the voice of Cass right,” says Jon. “We worked him really hard on it, getting the 1980’s cockney accent down, as it’s so different from today’s street slang. So we got him working in the gym in the East End, not just to beef him up, but to also get the voices of the old boys in there. He also had to play Cass from his early 20s into his mid 30s, so he got that ageing really well.”

Says Cass: “The lads, who I’ve known 30 years, said it was too weird – they said he’s got you to a T. He’s done a terrific job, brilliant. But I’m also proud to bring on another black British actor, you know. There aren’t many parts for black people in British films and especially not lead roles and I hope people see how Nonso really shines.”

As well as a magnetic central performance, the many period settings and the pop music were crucial to the film. “We go from 1958, to 68, 72, 83 and 87 to 1993, ” says Jon. “We had to get the fashion right each time and the music. We’ve managed to get tracks from Booker T and the MGs, Desmond Dekker, The Beat, The Jam, Madness, S-Express and Ride. I’m very pleased with the way the music came together because I’ve seen too many films let down by getting the music wrong.”

Another method for ensuring authenticity was to shoot as much as possible on location around London’s East End. Locations took in Bethnal Green, Shoreditch, East Ham, West Ham, Canning Town and even dipping into South London for some scenes around Elephant and Castle.

A Struggle to Walk with Dignity by Gerald Archambeau