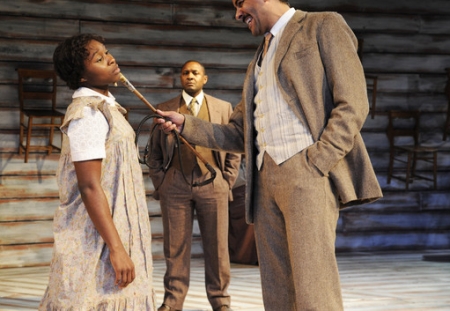 Sitting in the restaurant area of the theatre on a fine summers afternoon in London, I am greeted by the very handsome and cheerful Neil Reidman. Well the Birmingham born actor now living in South West London certainly does have everything to smile about.

He has recently finished filming his first lead role in a feature called Hard Time Bus and is currently performing in the European Premiere of The Color Purple Musical which is playing to sell out houses at the Menier Chocolate Factory.

So how? I ask , did you get to be part of such a great groundbreaking classic story.

“I first heard about it when my cousin told me that she wanted to go and see it as she heard it was coming to London. I then found out they were auditioning British actors for the production and they had been for a few months. Without hesitation, I wrote a letter to the producer and director of the production expressing my interest. they then contacted my agent a short time after. I then came in and met them both and was offered the part of Pa. It’s such an amazing experience working with such an wonderful cast of talented actors musicians and technical team who have all worked hard to make it such a successful production. I always felt we had a good show but once we met the audience the response was unbelievable. Having also met other professionals who have flown over from the US including Aimee Willis and Brenda Russell, the writers of the original music score has been quite special and something to remember.”

Color Purple directed by Tony Award Winning Director John Doyle has had rave reviews since opening on the 15th July. “The show is a must see for all friends and family which all can relate to” says Reidman. “It’s also a great time at the moment for black actors with shows at the National Young Vic and regents park telling our stories. May this continue and grow from strength to strength.”

On asking Neil what are his career plans for the rest of the year. “Well it would be nice to see what lies ahead in terms of this production, but I will be going back to Kenya where I also have some more filming to complete on another movie called Pearls of Africa.”

Lets see what the future brings for Reidman and the Color Purple cast.

The Color Purple runs at The Menier Chocolate Factory London SE1 until Sept 14th.
For tickets and availability visit www.menierchocolatefactory.com