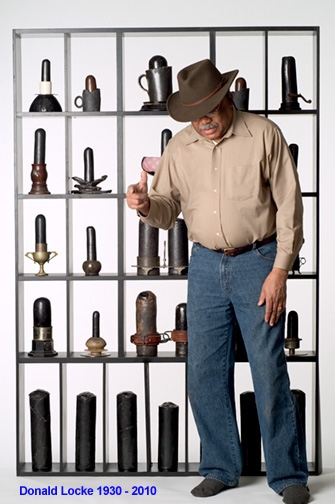 We are very sad to announce that the sculptor Donald Locke died at home in Atlanta on 6th December 2010.

Donald Cuthbert Locke, 80, of Atlanta, Georgia passed away on Monday, December 6, 2010 peacefully at his home with his wife and children around him.

Donald was born in Guyana, South America in 1930, he later went on to study art in London and Edinburgh. During the 1970s, he lived and worked in London. In 1979 Locke was the recipient of a Guggenheim Fellowship and he became artist in residence at Arizona State University. He lived with his wife Brenda in Arizona until 1990 when they moved to Georgia, making Atlanta their home.

Donald first was introduced to art at a free Workers Education class in Guyana, which he attended only in order to pass an exam needed to qualify as a teacher. He said “I was converted instantly. I became an artist, all in my head of course, and my life was changed forever “. His last two years have been incredibly productive, with solo shows in the UK and the US, the production of a new body of works in ceramics, publication of a monograph of Five Decades of mixed media sculptures, and the celebration of his 80th birthday. His extraordinary charisma, passion and generosity touched many people and he will be greatly missed.

Up Hill Down Hall: An Indoor Carnival