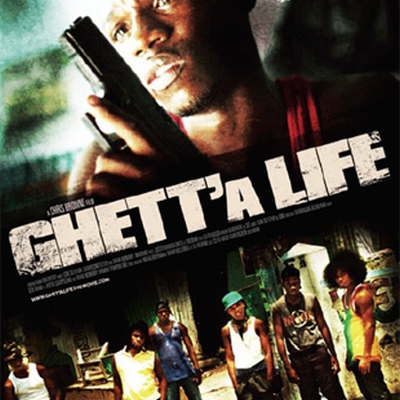 Ghett’a Life, is a film about Jamaica that no tourist, and most Jamaicans don’t get to see.

The film, whose Executive Producer is ex-World Heavyweight boxing champion, Lennox Lewis, is set in a suburb of Kingston, where each ghetto is under garrison law and run by gun toting gangs under the leadership of ruthless Mafia style ‘dons’.

Ghett’a Life, is a film about Jamaica that no tourist, and most Jamaicans don’t get to see. They only read or hear about it. But it is a world that writer, director Chris Browne was compelled to tell as he works in these ghetto communities of Kingston on a daily basic doing music videos for local DJ’s/ singers such as Bounty Killer, Movado, and Shaggy. The script examines the positive that can come out of this world which is divided by political rivalry.

Ghett’a Life is an ‘against the odds’ action drama set in a politically turbulent inner city community of Kingston. Derrick is a coming of age street fighter who lives in a politically divided community in a Kingston ghetto, where to cross the line means being a traitor and death.

One day, Derrick’s football goes over the wall into the gym, and he goes in to get it only to see every body he beats up on the street in the gym. So, he wants to join the gym and try out for the up coming Olympics. The only problem is, the gym is on the other side of his political divide. And, to go there he would have to go against his father and the his community. To top it off, the other side doesn’t want him there either. For the first time he sees his future held back by the system he accepted. To succeed he has to change the thinking of his his father and the community, but how?

Derrick defiantly follows his heart and is confronted with the serious repercussions of his decision. The don of Derrick’s community, Sin, is set on keeping him from crossing over to the ‘other side’ even if it means destroying Derrick’s dream. Derrick’s father is so blinded by political tribalism that he sees Derrick’s actions as betrayal. On the ‘other side’ , at the gym, is a coach who becomes Derrick’s mentor and someone who shows him that Jamaica is bigger than just one community and that his dreams are worth fighting for.

Jamaica’s highest grossing box office hit GHETT’A LIFE which enjoyed a 26 screen UK theatrical release in 2012 will be released on DVD and VOD in the UK in 2013.

Associate produced by former world heavy weight boxing champion Lennox Lewis with a soundtrack featuring Damian Marley and Shaggy, GHETT’A LIFE follows Derrick, a ghetto teenager who dreams of being an olympic boxing champion, but the only gym capable of training him is situated in a rival part of town and his attempts to cross enemy lines soon descends into a spiral of violence.

“GHETT’A LIFE has all the ingredients necessary to appeal to the core home video market in the UK” said Jinga’s Julian Richards. “It’s a straight from the streets bullet fest with a terrific soundtrack and an uplifting, feel good ending”.