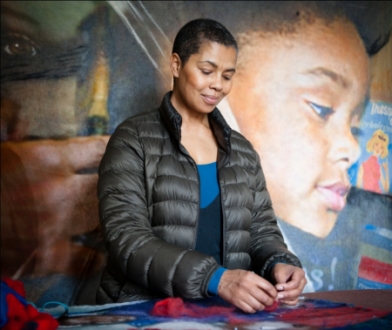 Artist Maggie Scott seeks to open a dialogue on the subject of British identity and representation in her major new exhibition of textile works in Leicester as part of the shape of things crafts initiative.

New Walk Museum & Art Gallery, Leicester welcomes acclaimed British Artist Maggie Scott who explores the tensions and contradictions of Black British identity in newly commissioned textile work in her exhibition ‘Negotiations, Black in a White majority Culture’ (7 April – 20 May 2012) as part of the national crafts initiative the shape of things.

Through her large-scale textile and installation works, Maggie seeks to open a dialogue on the subject of British identity and representation. Her textile works use felted re-interpretations of photographic images to juxtapose personal memories and historical events bringing to light hidden continuities and connections in British lives.

One of Maggie Scott’s textile works in the exhibition, Wedding Day from the Wedding Day series, shows contrasting narratives of history in a powerful double aspect image that juxtaposes personal and political: the wedding day of the artist’s parents and a National Front ‘Keep Britain White’ rally in Trafalgar Square. Both events coexist in the history of the British nation.

Wedding Day was the first of Scott’s new body of work that uses a technique of felting printed silks, and the beginning of a series of works that move between both personal and communal narratives. The lengthy labour involved in producing her textile works combines with her use of photographs, personal and historic to enact a different awareness of time and history, one which emerges from the experience of social marginality. There is not only an urge to reclaim the past but also an attempt at renewal through the evocation of memory and touch, in making the Wedding Day, Scott felts and stitches only the things she can remember, the sensuous surface of the felted fabric conjuring up touch and bodily presence.

The doubleness of similarity and difference is also explored in an installation called Step Out of the Shadows, a critique of the beautification industry and the seduction of skin lightening.

Whilst in the felted works Mixed Messages //1 and Early Messages //1, Scott also combines family snapshots with images of blackness fed back to her as a child by British popular culture: Josephine Baker, the Black and White Minstrels, images of how the black community were perceived and images over which they had no control. In her use of family snapshots Scott focuses on emotional connections, on the collective process of calling up memory and shared emotion.

Maggie is well-known for her sumptuously crafted felt textiles and her latest large-scale works draw out the aesthetic and symbolic potential of the laborious process of felting. Often assumed to be ‘women’s work’, felt here becomes the fabric of interwoven narratives and shared lives.

Maggie Scott is a British Artist and Textile Designer. After graduating from St. Martin’s School of Art in 1976, Maggie was immediately invited to the John Ashpool team based in Perugia, designing knitwear for exclusive boutiques around the world. Moving between Italy and France, she spent four years learning her trade before setting up her first studio in 1980. Maggie Scott has focused on a highly successful career of creating woven, knitted, stitched and felted pieces of ‘wearable art’. Her professional life as a textile artist has existed in parallel with her involvement in gender and race politics.

As a result of winning the shape of things bursary, Maggie Scott has been able to develop an exciting new body of work that seeks to open up dialogue about identity, ethnicity and representation:

“The shape of things bursary has given me the opportunity to develop a new body of work that aims to explore and reflect, for an ethnically diverse audience, on the question of national identity and what it means to be British, in particular for those who identify as Black.”

“The title Negotiations is significant. Clearly everybody, regardless of race, ethnicity, class or gender has had, at some time in their lives, to adjust, compromise and effectively become socialised into the prevailing dominant culture. However, the extent to which our group is required to negotiate, alter and transform itself is contingent on the power relationship we have been assigned within the culture.”

“In the majority of the pieces for the exhibition I have identified some of the ways we have been forced or sometimes seduced into negotiating and settling for less.”

Maggie Scott is Black British Artist who explores growing up in London during the 1950s and 60s to mixed parents. She uses old photos to turn them into textiles for this exhibition. She feels she has always had to ‘negotiate’ who she is and what her identity represents.