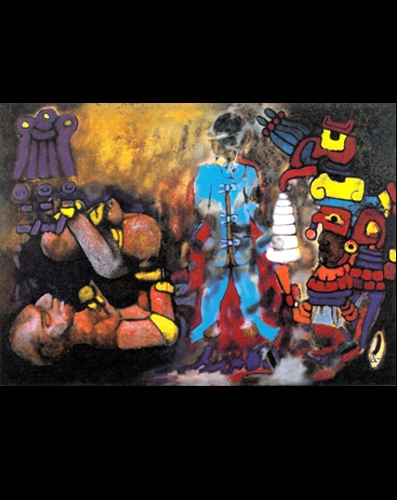 October Gallery will present an exhibition of selected works from renowned artist, Aubrey Williams, including paintings from the Olmec Maya and Now series. This extraordinary collection of works on canvas aims to establish new insights into one of the 20th century’s great artistic spirits.

“The Maya were the greatest civilisation of their time… a people who produced a technology and cosmology from which we are still learning today; these people vanished in a very short space of time leaving only tarnished artefacts due, I feel, to their inability to cope with their technology and the changes their achievements engendered within the metabolism of their living environment and ecology; exactly the position we find ourselves in today.” Aubrey Williams, 1985.

Aubrey Williams was born in Georgetown, Guyana in 1926, and began painting and drawing from the age of five. A trained agronomist, he lived for two years with the indigenous Warrau people in the remote northwest rainforest of Guyana. In 1952 Williams moved to London to study art, including life drawing at St. Martin’s School of Art. Over the following years, he was part of a spectacular explosion of creativity, optimism and productivity generated by the influx of Caribbean artists, writers and intellectuals to London during the 1950s and 60s. This cultural foment led Williams, along with novelist Andrew Salkey, poet and activist John La Rose, sculptor Ronald Moody, and others, to form the Caribbean Artists’ Movement in 1966.