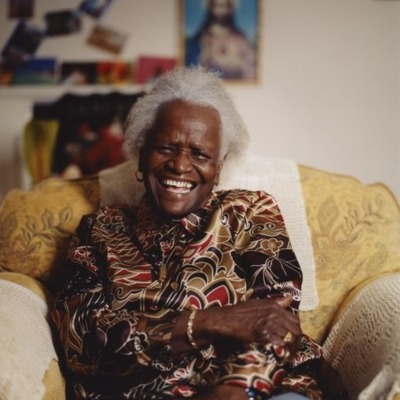 London is a vibrant city with many different cultures contributing to its success. Four Corners, the sixth and final exhibition in the National Portrait Gallery’s acclaimed Reaching Out, Drawing In programme, celebrates the wide diversity of the city. Reflecting the pride people feel for their own part of London and the pride they feel for their cultural heritage, the exhibition brings together people of all ages from the four corners of London – north, south, east and west.

In North London, a group of participants with Chinese, Japanese and Taiwanese heritage worked with artists Andrea Sinclair and Weng Man to produce a clever twist on the traditional Chinese craft of kite making. In South London, young people on the Urban Vision programme at Brixton’s 198 Gallery used a range of media to create a vibrant portrait of life as a teenager in their part of the city. The resulting work includes photographic montages, fashion and textile design and installation art.

And in West London, drawing on influences from Bhangra music, young people from the Awaaz Youth Project in Hounslow created an energetic display using music and visual images to depict Asian culture in the west of the city. Working with artist Hardip Dhanjal and DJ Abdellah El Mansouri the participants produced striking photographic pieces, which are brought alive in the exhibition by the sound installation.

Displayed alongside the participants’ work are photographic portraits of celebrated Londoners from each of the exhibition’s ‘four corners’ in the National Portrait Gallery Collection. Portraits of Gurhinda Chadha, Trevor Nelson and Andrea Levy are among the works on display.

Rebecca Connock, Reaching Out, Drawing In Project Manager, says: ‘We’ve been lucky enough to work with four very different groups of people, all of whom have really grasped the project with both hands. They’ve shared their ideas, their culture, their experiences with us – and brought a fresh perspective to portraiture. We’re tremendously impressed and humbled by the work produced.’

Reaching Out, Drawing In has been a sustained programme of new audience development which seeks to give wider access to the Gallery’s collections through innovative and engaging interpretation. It has been made possible by the generosity of the Heritage Lottery Fund.

The Hackney Caribbean Elderly Organisation is a social care agency giving support and offering services to elders of Caribbean descent in Hackney. Over a number of years the organisation has developed a special relationship with National Trust Property, Sutton House.Click here for more info

Black Heroes in the Hall of Fame