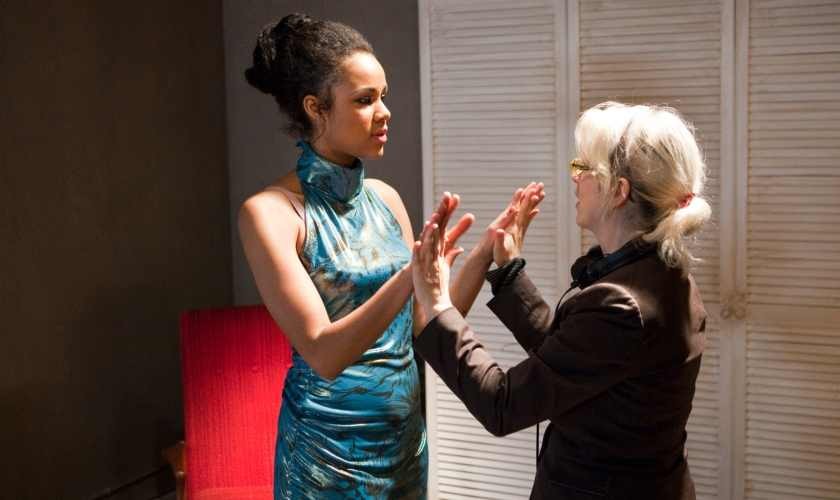 Q&A with Dreams of a life filmmaker Carol Morley

Talking about the making her film ‘Dreams of a Life’ a portrait of Joyce Vincent, and an insight into the world she inhabited.

How did the film come about?

I read an article in The Sun newspaper with the headline ‘Woman lays dead for three years’. I was intrigued. There was no photograph of Joyce in the paper – just a photograph of the exterior of the bedsit where she died. Joyce’s age was reported as 40 (though she was actually 38 when she died), which seemed too young to be so forgotten. There was no real information about who she was. I didn’t know what she looked like, what her ethnicity was. No newspaper got hold of a photograph of Joyce.

The Sun reported on how Joyce was found with her television still on and in the middle of wrapping Christmas presents. The idea that somebody could lay forgotten for three years in a busy part of London seemed really strange, but what struck me most was the potent image of the television flickering over her decomposing body for all that time. The image of the Christmas presents struck me as very powerful too, as they spoke of other people, of family, of friends.

As soon as I saw The Sun article I thought, I’m going to make a film about this woman, I can’t leave her to be forgotten. I didn’t realise my quest would take me five years, but I just knew that it was my kind of destiny to make a film about her. I visited the location where Joyce died, and again was struck by how strange it was. Considering she died with the TV on, it seemed haunting that behind where she lived was the transmission tower of Alexandra Palace, where the BBC once had their broadcast headquarters. I was also struck by the name of the estate where she died ‘Sky City’ and the shopping centre she lived above, with massive signage, called ‘Shopping City’. From the carpark opposite the shopping centre was massively busy, while the estate above, in stark contrast, looked deserted. Joyce had lived above somewhere so busy, across from Argos and HMV, in a place where people were milling about at all hours, yet she’d just lived in such isolation.

How did you go about finding the people that knew Joyce?

I put adverts seeking people that knew Joyce in various London publications, Time Out, Evening Standard, Metro and also on Internet sites. I also put an advert on the outside of a black London taxicab. The advert was quite brief, I put what I knew about her from the newspapers, that her parents were born in the Caribbean, that she was born in Hammersmith in 1965 and that was it really.

The only lead that I had, that she had maybe worked for Saatchi & Saatchi got me nowhere. After searching their files they said that they had no trace of Joyce. I also went to the Family Records Office and the British Library and tried to find any official records of Joyce that I could – these helped in tracking addresses and certain people down.

Can you expand on some of the people that appear in the film and how you found them?

Yes of course, and I just want to say, there were a lot of other people I found that didn’t want to appear in the film unfortunately, although I suppose they did help me build a picture of Joyce and the eras she lived through.

Martin The first response to my advertising campaign was Martin via email. He was a boyfriend of Joyce’s in the 80’s and saw her on and off over the years. He had been Googling Joyce’s name and come across my ad. While he was Googling he had also found some of the newspaper articles but was hoping it wasn’t ‘his’ Joyce as they had got her age wrong and there was so little biographical information. I telephoned him and we established it was the Joyce he had gone out with when they were both in their twenties. I met Martin soon after and through him found out a couple of the places Joyce had worked – she had worked with him in the City of London (the UK’s financial district). Martin said that Joyce had once asked him to marry her.

Martin brought along photographs of Joyce, and so that was the first time I saw what she looked like. It was a moving experience to see her for the first time. And to see just how beautiful she had been, which kind of goes against who we think can be forgotten, we just don’t think that the young and beautiful could be so unmissed. Martin gave me other names of people that he was no longer in touch with, but that had been part of his circle and I managed to track some of them down too. He also told me that Joyce had wanted to be a singer.

Kirk Martin had mentioned that Joyce had once lived with a musician called Kirk in Wapping, who was her landlord. Martin knew the general area where the house was. I looked through lots of electoral register pages until I found a Kirk Thorne who had now moved out of the address I found. I Googled his name and it came up in relation to Trinidad. I took out an advert in a paper there but heard nothing! Though I did find a 12″ record he had once made called ‘Party For Two’. A couple of years into making the film I Googled Kirk’s name again and luckily he had just made a Facebook page so I found him. Kirk had recorded Joyce in his recording studio but didn’t know exactly where the tapes were – that was an ongoing hunt! It took years!

Catherine Kirk gave me Catherine’s name and I eventually tracked her down in the USA via someone that knew Catherine’s mother. It took a while but I eventually managed to make contact. Catherine had been a flatmate of Joyce’s at Kirk’s and they had become firm friends, but over the years had lost touch. Catherine was an air hostess and said that Joyce told her she was a secretary, which Joyce herself thought was boring, but then later appeared to be working in finance, so she was never sure what Joyce did. Catherine said that whenever they went out somewhere Joyce was hounded by men.

Alistair Joyce’s fiancé (who doesn’t feature in the film and that the police never tracked down) lead me to Alistair. He contacted me twice by phone after seeing my advert, but refused to meet me and disappeared on me, changing his numbers and his job. However he did tell me a lot of things, one of them being that Joyce had once known the soul singer Betty Wright and had been the girlfriend of one of Betty’s associates. I wrote to Betty in Miami and eventually had a phone call from Alistair, who said he was Betty’s tour manager, and that Joyce had lived with him for a couple of years and been very significant in his life. He said that he remembered reading The Sun article but had never connected the Joyce he knew with the Joyce in the newspaper.

Mandy Mandy had gone to primary school with Joyce and remembered her very well. Mandy was just one of the many people that I tracked down that knew Joyce from school, through the Internet site Friends Reunited. She remembered Joyce singing and was deeply upset that her school friend had died in such circumstances. She also remembered reading the article about Joyce in the Sun at the time, but never believed it could have been the Joyce Vincent that she knew. She believed that Joyce had gone off and had a singing career somewhere – or at least gone off and been successful. She said that Joyce had always seemed successful, even as a child. And that she had always been immaculately dressed (a recurring statement about Joyce) with never a hair out of place.

Did you find the family?

Yes I did. And I met one of Joyce’s sisters. But the family wish for anonymity and I’m going to respect that.

Do you think you became obsessed with Joyce?

Oh, I did, no doubt. I mean, she often called herself Carol, and that’s my name! And I found out we’d once lived on the same street in London. There were loads of connections and parallels, her mother died at the same age as my dad, and Joyce was the same age when her mother died, as I had been when my dad died. I’ve always been interested in music, and at one point wanted to be a singer, so it seemed strange that in researching Joyce’s story I came across a whole raft of musicians and connections to the music world and that Joyce too had wanted to be a singer. I grew very close to her, even though I had never met her, and I felt that we had so many parallels in our lives I could understand her to some extent. I mean maybe you could call it a series of coincidences, but I really did feel it was my destiny to tell Joyce’s story.

What do you think are the major themes of the film?

I think that communication is key. The image of Joyce dying with the television on and it remaining on seems to me to underline the idea that in an age of communication we can be so dislocated and alone. I think that we live in an age where we appear to be always contactable and always seen. Mobile phones, emails, Twitter, Facebook and other social networking sites make it seem – what maybe is just an illusion really – that we are all connected, that we live in the most connected and visible time of all history. Everywhere we go (especially in the UK) there are surveillance cameras and it is as though everyone always knows where you are – but how connected are we really? Do the very communication devices that supposedly connect us actually isolate us and stop us from being really seen? I mean there is loads more I could say on the subject, but really, I think communication is a key theme in the film.

The other theme I think is identity – of race, class, gender, sexuality. And of how we are defined through other people and whether anyone can really know who we are. There is definitely the theme as well of what it is to be a woman – the defining pressures of girlhood and womanhood. And I think that the film taps into common anxieties around modern life- loneliness and social status to name but two. The film touches on ideas of stardom and celebrity, which again seem to be contemporary preoccupations. In some ways for me, the image of a woman lying dead for three years, her TV still on, above a shopping mall seems a very modern symbol of maybe what is wrong with our world: commercialism gone mad, communication everywhere but somehow askew, and loneliness the modern disease! I mean we will never know if Joyce was lonely, or just alone, but hopefully her death can make us look at our lives and how we live them – so I really do think a major theme of the film is contemporary life and how we live it.