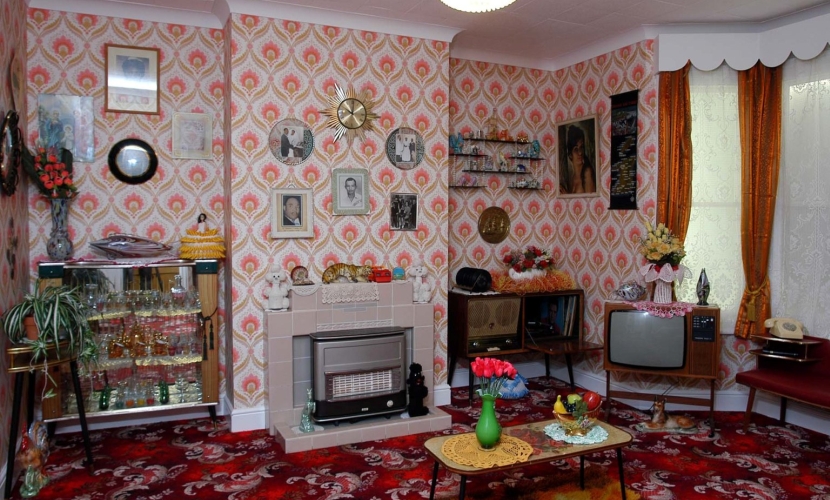 This exhibition will explore the essence of homes created by post-WWII immigrants who have come from the Caribbean to Britain since the 1960s. The central focus of the show will be an installation by writer and guest curator Michael McMillan which represents his vision of the traditional ‘West Indian’ front room, drawn from memories of his parents’ and relatives’ homes in the 1960s and 1970s.

Special attention has been given to the choices people made in furnishing their front room, the symbolism of particular objects and the links between objects and personal identity. Michael’s evocation of a typical ‘West Indian’ front room includes a range of possessions popular in African-Caribbean homes at the time and which he believes had special resonance for their owners. His rich recollection of being a young boy in his parents’ front room describes some of these objects and evokes the textures, smells and sounds of that East London home:

"You weren’t allowed in this room unless there were guests, but it’s Sunday, Jim Reeves’s ‘The Distant Drums’ is blaring out of the ‘Bluespot’ radiogram and big people are chatting news from back home. Mum is drinking Babycham. I pass her the plastic pineapple ice bucket and listen quiet as a lamb, my skin sticking to the plastic covering the PVC imitation leather settee. I smell of rice and peas and the paraffin heater competing with the air freshener and polish from the drinks cabinet filled with glasses that are never used. I touch the painted glass fish and plastic flowers on fanciful sugar-starched crochet on a gold-rimmed fake marble coffee table. A blue-eyed Jesus looks down at me from The Last Supper on floral wallpaper saying ‘cleanliness is next to godliness’. Sunshine beams through pressed lace curtains onto the colourful patterned carpet. The front room looked so good, that it didn’t matter how poor we were, we were decent people. Growing up, this room echoed the proverb, ‘By the sweat of your brow, you will eat bread’ and haunted me like nails scratching a blackboard. I know now that it is part of who I am and unconsciously I recreate a similar shrine in my own home today".

An evocation of this childhood memory will be created for the exhibition, a front room of the 1960s and 1970s in which visitors will be encouraged to linger. This will be put into context by listening posts with brief excerpts from interviews carried out with first and second generation people of African-Caribbean descent and West Indian elders who shared their experiences of setting up home in Britain. Filmed interviews by Joel Karamath will run on two screens, and photographs of interiors from London’s African Caribbean and Black British communities will line the walls. In a separate seating area, visitors will be able to leave their own memories of their own homes.

‘What makes a Home?’ is a small display of work created to accompany The West Indian Front Room. Photographs, drawings and testimonies from teenagers at Park View Academy in Haringey explore their ideas about the importance of home, the meaning of objects and their dreams about their ideal homes of the future. The group comprises a cross-section of backgrounds, including Caribbean, and the views expressed are marked more by their age and by the experience of living in an urban setting than by their ethnic and cultural backgrounds.

The West Indian Front Room exhibition is a collaboration between the Geffrye Museum and writer and artist Michael McMillan, funded by the London Museums Hub, of which the Geffrye is a partner. Other projects with a Caribbean theme will run concurrently under the banner: Caribbean Rewind: a part of our history. For more information, please
see www.caribbeanrewind.co.uk (on-line from beginning of September).

Michael McMillan is a British-born writer of Vincentian parentage. His plays and performance pieces have been produced in the UK and Holland. Core themes in his work explore post-WWII immigration and settlement, identities and gender, hidden histories and the family.

Pogus Ceasar at the V&A

Contemporary Caribbean Art and Design at the V&A