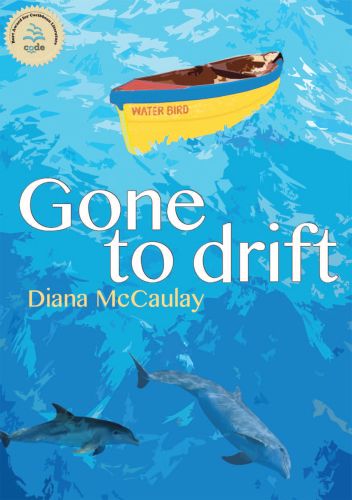 Papillote Press is delighted to announce the forthcoming publication of Gone to Drift by the award-winning Jamaican writer Diana McCaulay. This young adult novel, which won second prize in the CODE’s Burt Award for Caribbean Literature (2015), will be published on 29 February 2016.

Gone to Drift tells the story of a 12-year-old Jamaican boy, Lloyd, and his search for his beloved grandfather, a fisherman who is lost at sea. An adventure story about a boy confronted with difficult moral choices it will inspire its readers to choose bravery over cowardice and to follow their hearts.

“This is my first novel for young adults,” says McCaulay, “and as reading meant so much to me as a teenager, I’m hoping Gone to Drift will be read and enjoyed by many Caribbean young people. I wanted to pay tribute to our long tradition of fishermen, and I’m so grateful the Burt Award has made that possible. I’m also thrilled that Gone to Drift will be published by Papillote Press, a Caribbean publishing house which I’ve long admired.”

Gone to Drift follows on from McCaulay’s two acclaimed novels, Dog-Heart (2010) and Huracan (2012) and is built on her 2012 Regional Commonwealth prize-winning short story, The Dolphin Catchers (Granta Online). As well as writing, McCaulay founded and, for many years, ran the Jamaica Environment Trust (JET); she was also a popular newspaper columnist.

As Pamela Mordecai, author of The Red Jacket, says: “Gone to Drift is a love story about Lloyd’s deep affection for his grandfather, and about the author’s deep love for Jamaica, its land and seas. A Jamaican coming-of-age story – realistic, often funny and deeply touching – it’s a story for adventurous boys and girls, and for grownups too.”

CODE’s Burt Award for Caribbean Literature is an annual award given to English-language literary works for young adults (aged 12 through 18) written by Caribbean authors. Established by CODE – a Canadian NGO that has been supporting literacy and learning for over 55 years – with the generous support of the Literary Prizes Foundation and in partnership with the Bocas Lit Fest, the Award aims to provide engaging and culturally relevant books for young people across the Caribbean.

Papillote Press, based in Dominica and London, specialises in books about Dominica and the wider Caribbean. “I love this story. It entwines a tale of modern Jamaica with memories of the old ways of the sea. The reader follows Lloyd’s desperate search for his grandfather every step of the way.” says Polly Pattullo, publisher of Papillote Press.

Emily Knight I Am

Boy Boy and the Magic Drum