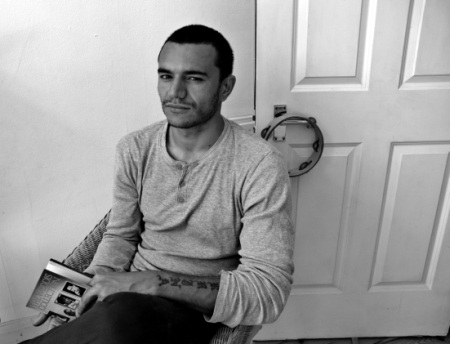 Raymond Antrobus is a spoken word poet from Hackney, London. He is co curator of Chill Pill a showcase Spoken Word at Soho Theatre & The Albany Theatre.

Finish this statement: I think poetry should…

What are you up to at the moment?

Studying for my Spoken Word Education MA, Promoting my Spoken Word event – Chill Pill (next one is May 23rd at The Albany) and preparing for a Hammer & Tongue Poetry National Tour in June.

What’s next, Any new projects?

Hoping to make Chill Pill a Spoken Word Radio Show for the BBC and maybe curate a Spoken Word Film Festival. I have another idea of writing for radio, learning Spanish and going on a Pablo Neruda Pilgrimage to Chile.

What themes are most prominent in your writing?

I’m writing mostly autobiographical poetic prose at the moment. Family stuff mainly, I guess that links to identity too.

Where does the well of your inspiration spring from?

I don’t know, if I did then I’d go to that well and stay there. I’m not a very disciplined writer because I’m easily distracted. Ideas come randomly, usually not when I’m sitting down stroking my chin but when I’m cycling or doing shopping or overhearing a conversation on the tube.

Do you have any major literary influences? What kind of books were you reading when you were a child?

I was reading mainly comics when younger, comics and Goosebumps and Point Horror. I was obsessed with writing my own horror stories too, mainly about zombies, ponies and shoot outs. As a kid I loved Roger McGough, Dr.Sessus, The Beano, The Dandy and Buster. When I was about 18 I read Siddhartha by Hermann Hesse, Orwell’s Down and Out In Paris And London, Pirsig’s Zen and The Art Of Motorcycle Maintenance within three months and these books swirled around my brain and changed something about me.

How do you ensure that your writing and performances provide real value for your audience(s)?

I make sure that an audience is considered when writing a poem I intend to read. I do my best to not be too self-involved. It is said that “at its best, poetry is a language that is adequate to our experience” so if I write in a way that is personal I am ultimately attempting to create something that is universal – otherwise the poem needs to stay in my diary.

What do you think audiences respond to most in your work?

haha, I don’t know, sometimes people smile but they’re probably just being polite, sometimes people frown at me for a while, but they might just have one of those faces that look unimpressed by default. I’m kidding, you can feel when an audience is with you and if I’m doing my job right (which I like to believe is most of the time) then I am engaging people.

Your best poetry/literary moment: what was it?

Had a couple poems of mine published in a few magazines last month – this made me feel good and of course having my first short collection out there is a blessing. General poetry though, probably the tours, I went around Germany, Switzerland, South Africa and the US in the last few years, I always get a lot out of them â€“ Best gig might have been LissArd Festival in Cork, Ireland last summer. Me and my poetry clique Chill Pill performed to almost 2,000 people and got a standing ovation – that kept me high for a month.

Who or what are you currently reading?

The God Of Small Things by Arundhati Roy and re-reading The Gift by Lewis Hyde… poetry wise – just finished Roger Mcgough’s As Far As I Know collection and my friend, poet Keith Jarrett just self-published a book of his poems which I enjoyed.

How long does it take you to write a poem/story? How many drafts do you usually do?

Your family is from Jamaica. How much does this play a part in your work?

I spent a bit of time in Jamaica growing up; I have a lot of family out there but always felt like an outsider to them. I was conscious of being light-skinned with these prominent European features of mine. I have cousins who called me ‘white boy from England’ .. even though a few of them were as light as me… This more than anything led to a feeling of isolation, not just with that side of my family but also when making Caribbean friends. I remember at school I made a joke about Jamaicans and a boy I didn’t know took offense and punched me in the face, not knowing I was talking about my dad… he had no understanding just how mixed up and ambiguous the Caribbean look can be. I’ve been writing a lot about my dad recently, he’s not well and I have been doing some nursing for him, he’s told me a lot of stories that will make good poems when I get through them, this is my route into writing about the Caribbean experience – via him… Having my ambiguous look has its perks; I do blend in in a lot of countries, as long as my keep my big British mouth shut.