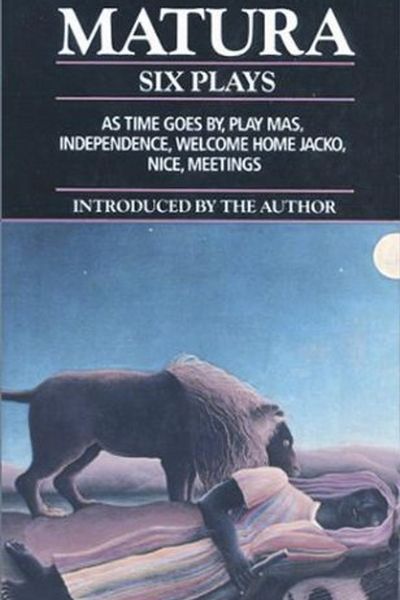 As Time Goes By, Matura’s first play is a satirical comedy of manners set among first-generation immigrants and won the George Devine and John Whiting awards.

Nice (1973) is a deeply ironic monologue by a recent immigrant commenting on his experience of the hypocrisy of British officialdom;

Play Mas (1974) recreates the impact of the heady political momentum generated by the People’s National Movement in Trinidad in the early fifties and won the Evening Standard Most Promising Playwright Award.

Independence (1979) is set in Trinidad in the pool bar of the Grand Hotel and charts that country’s troubled move towards self-governance "Matura’s fascinating play is a searching and moving examination of a political problem" (Nicholas de Jongh, Guardian);

Meetings, set in independent Trinidad (1982) is "a sardonic social satire which gradually grows darker and darker until it becomes a nightmare vision, something close to an apocolypse. The journey is as nimble as it is comic. Mr Matura is a gifted playwright." (Mel Gussow, New York Times).

"What makes Mustapha Matura our finest dramatist of West Indian origin? A wry humour, warmth of feeling, a knack of observing human oddity and for embodying it in quirky, unpredictable dialogue, and the fundamental seriousness with which he writes of people who, like himself, have in some sense become severed from their roots. He ranges from the usefully mischievous to the wickedly funny." Benedict Nightingale, The Times