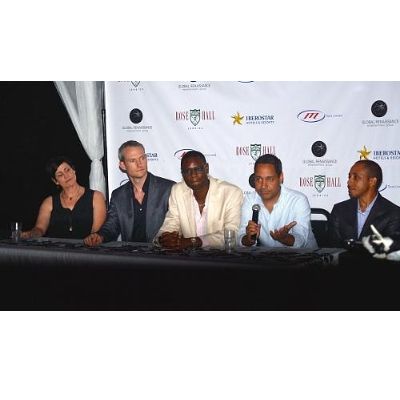 Arthur Wylie of Global Renaissance Entertainment Group and Michael Rollins, Director of Rose Hall Developments, Ltd., announced that they will partner with the island of Jamaica to produce an epic trilogy of films based on the legend of Annie Palmer – The White Witch Of Rose Hall.

Details were announced Friday, September 26th at a press conference in Montego Bay, Jamaica. The fact-based supernatural thrillers will be written and Executive Produced by Jeffrey Reddick, creator of the $650 million “Final Destination” franchise. The trilogy will be produced by CEO, Arthur Wylie and COO, Dale Godboldo for Global Renaissance Entertainment Group, Inc., and Co-Executive Produced by Michael Rollins, owner of the Rose Hall Estate in Montego Bay. Stephanie Denton, former President of International Sales and Distribution for Lionsgate, will handle worldwide distribution for the films, leveraging her success with “Underworld,” “Saw,” and “Hostel.” The first film in the planned trilogy is in development with an estimated production budget of $20 million to $30 million, and will begin shooting next year in Jamaica. The trilogy adds to the catalogue of Global’s multi-picture deal with Reddick, which includes the upcoming “Superstition” franchise.

White Witch of Rose Hall is based on a well known story in Jamaica about ‘Annie Palmer’ – an English-Irish woman born in Haiti in the early 1800s. When her parents died of yellow fever, she was adopted by a nanny who taught her to practice witchcraft and voodoo. She moved to Jamaica and married John Palmer, owner of Rose Hall Plantation. Annie murdered Palmer along with two subsequent husbands and numerous male plantation slaves. Annie’s spirit is believed to haunt the Great House of Rose Hall to this day.

“I am honored to collaborate with Michael and his family on a project that pulls from such a rich culture and vivid history,” says Arthur Wylie. “We not only share a love for Jamaica and commitment to paying homage to this extraordinary tale, the Rollins also bring an unparalleled level of enthusiasm and business acumen that stems from building a billion dollar empire from industries as varied as real estate, casinos, and hotels.”

“Jamaica has been near and dear to my heart,” said Michael Rollins. “To have a project like this, from Jamaica, filmed in Jamaica, is something that our family has been working to realize for over fifty years now. I’m excited to be working with Arthur, Jeffrey, and Dale to finally make it a reality.”

The Producers are working hand in hand with JAMPRO, an organization that works closely with local and global entrepreneurs seeking to tap into the many investment and trade opportunities in Jamaica. Global’s goal is to bring additional film opportunities to Jamaica while providing employment opportunities for its residents.

“JAMPRO is pleased to be associated with a project of this magnitude,” says Carole Beckford, Film Commissioner at JAMPRO. “The impact it can have on the local industry is incredible, and we anticipate a great working relationship with the team. We look forward to the end result.”

To mark the announcement of the films, Global Renaissance invited both US and local media, business associates, investors, and other VIPs to a weekend filled with activities centered on the celebration of Jamaica. Guests were hosted at Iberostar Grand Hotel Rose Hall in Montego Bay, led on island excursions by Chukka Tours, and treated to an exclusive finale party called “The Destination Experience: A Global Renaissance” at Goldeneye Resort. Sponsors included Visa Signature, Range Rover, Jaguar, Virgin Atlantic, and Magellan Jets. Transportation throughout the weekend was provided by JTL Tours.