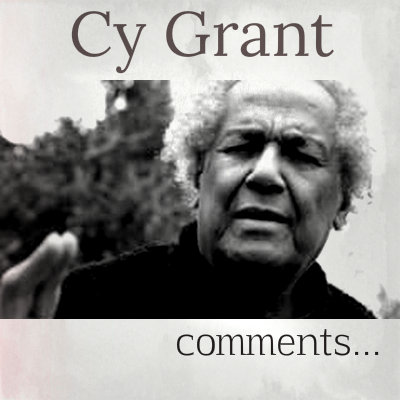 The BBC’s dramatisation of Angela Levi’s play under the title Love in a Cold Climate, BBC 1 Sunday Dec. 6, may well fit its declared drama mission to shine a light on 20th century British history and should be commended.

Angela’s book has highlighted the difficulties service men from the Caribbean have faced during WWII – hostility from American servicemen in England and a mixed reception by the general British public. If the BBC is really serious about making these experiences known, maybe it should look at the real-life war experiences of someone who is a part of BBC TV history. His regular appearances on the TONIGHT programmes of the late 1950’s made him a household name – the first black person to appear for over 2 years on our screens.

Grant, an ex Fl/Lieutenant in the Royal Air Force, was a navigator of a Lancaster during WWII. Shot down during the \battle of the Ruhr he was a Prisoner of war in Germany for 2 years. After the war he studied law and qualified as a barrister-at-law His story is told in two of his books, A Member of the RAF of Indeterminate Race, his war memoir,[Woodfield 2006] and Blackness and the Dreaming Soul, [Shoving Leopard 2007], Both books deal with the prewar policy of the RAF regarding the recruitment of ‘men of colour’, its subsequent change of heart and the issues that resulted, in great detail.

Most importantly, the latter book speaks of the author’s experiences in Britain after the war, starting with his inability to find employment of any sort as a lawyer; sidelined as a calypso singer and ignored as a cultural activist. He set up DRUM the first Black arts centre in London the 1970’s and CONCORD Multicultural Festivals in the 1980’s, in an attempt to foster good race relations in our diverse society. Despite the resounding success of the latter (22 inner city Festivals and 2 county wide), they were ignored by the media..

The most striking omission, however, is that Grant was instrumental in setting up an online archive of all aircrew from the Caribbean who flew in the RAF. This has been achieved within the last year with the outstanding help of Dutch webmaster Hans Klootwijk, son of Hans Klootwijk, who wrote the booklet, Failed to Return, Lancaster W8427, which records the entire details from time of take off to its final demise, of just one flight over Holland during WWII, where 6,500 allied aircraft were shot down – that of the Lancaster bomber of which Grant was navigator!

Until this year, there has not been any official figure of the number of air crew from the Caribbean who flew with the RAF – not at the Air Ministry or at The National Archive We now know that there were about 440 air crew from a Caribbean, a fitting Memorial for family; and a stark reminder of an important historical fact until now unavailable. Will the BBC or any other media service, feel fit to put the record straight?

Granddaughter of the Windrush

The Pink House at Appleton