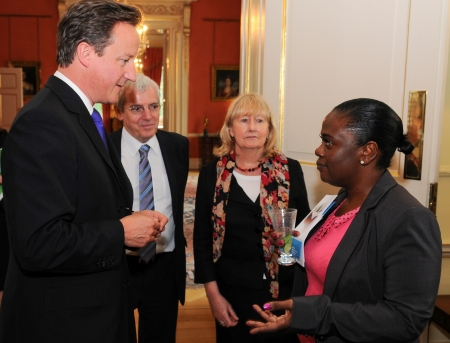 Neomi Bennett was born in London of Jamaican parents and grew up in Surrey, studied at Kingston University and graduated in 2011 as a registered general nurse, but she looks destined to be more than just another nurse.

Thanks to her natural instincts as a ‘problem solver’ Neomi saw the need for a device that would be beneficial for her patients and her fellow nurses, and that vision has led her to become the founder & Director of Neo-innovations UK Ltd. and the inventor of a medical device called Neo-slip, a truly innovative and easy solution to aid and encourage the application of elasticated anti embolism stockings which reduce the risk of surgical patients suffering from Deep Vein Thrombosis by as much as 60-80%!

By design, Anti embolism stockings are extremely tight and very difficult to apply for both the nurses who have the task and for the patients (especially for the elderly). So Neomi was inspired to create Neo-slip, a slippery pouch that comes in various sizes and creates a lubricous effect which allows the tight fitting anti embolism stockings to slide easily onto the foot and makes the whole process as easy as putting on a pair of socks, resulting in greater comfort and satisfaction for the patients wearing the stockings, and significant time saving benefits for the nurses or anyone applying them.

Neo-slip has become an instant hit and Neomi has already secured UK distribution deals and made sales and promotional inroads in the USA, Canada and Europe, and she has a patent pending and registered tradmark.

Neomi has also received an invitation to tender from the NHS, and she was recently highly commended by the Lloyds TSB Enterprise Awards 2013, winning the ‘Bright Ideas’ competition as well as receiving a Europas 2013 nomination, a Nursing Standards Award, and the NVPC ‘Peoples Choice’ Award.

She has also been successful in obtaining funding from the UK charity UnLtd.

Neo-slip has certainly attracted the attention of major industry players in the UK with an invitation to the houses of parliament to meet business and innovation secretary Vince Cable and also in a recent invitation to Downing Street to meet Prime Minister David Cameron who has shown a personal interest in her outstanding innovation and potentially lifesaving invention.

Visit the website to find out more about Neo Slip

Neo Slip has been nominated for a Smarta 100 award.

The Smarta 100 is an annual celebration of the most resourceful, inspiring and disruptive small businesses in the UK.