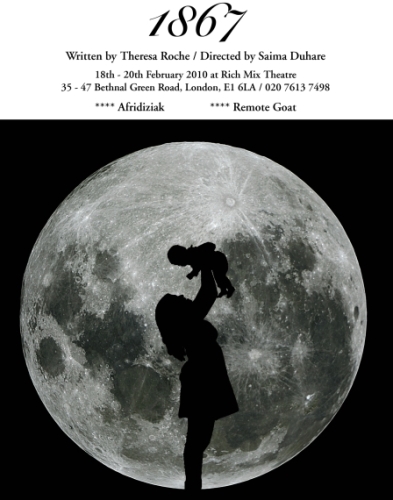 1867 A play inspired by the story of Madam CJ Walker – The First African- American woman to become a (Self-Made) Millionaire. The play celebrates the courage, growth, entrepreneurialism and philanthropic work of Delilah Mc Andrew – in contrast to her struggle adversity.

Following its sell out debut performance during Black History Month in 2009 this enthralling show now returns, hosted by RichMix, London’s vibrant up and coming cultural centre.

Palladini Productions are delighted that this popular play is being showcased as part of RichMix’s ‘Retrospective 2010 season’ where the viewer is invited to look back into the past and learn from it. Madam Walker’s life is the perfect choice for this theme and ‘1867’ is a celebration of her life told through the character of Deliliah MacAndrew, a courageous yet at times stubborn lady, whom you will possibly both admire and at times dislike too.

Born after the end of the American Civil War, the first member of her family of former slaves to be born free, by the age of 7 Delilah finds herself a penniless and illiterate orphan. She starts her working life as a laundry maid and at the age of 14 she marries a violent drunkard. Following a divorce she then marries a decent man only to have her dreams of happiness shattered when he is cruelly murdered by the Ku Klux Klan leaving her a widow of 20 with a baby daughter in her arms.

‘1867’ is the moving story of how she triumphs over adversity, battles against racial prejudice, breaks the gender boundaries of the late 19th century and sets up her own phenomenally successful hair and skin cream products business both selling and making items especially designed for African-American women. By the time of her death in 1919 she will have built the largest black owned manufacturing company in the world with over 15,000 employees. Tough, shrewd and tenacious, Delilah never forgets her long hard journey to wealth and she will become a great philanthropist whose influence will reach to The White House itself. This play is sometimes heartrending and sometimes extremely comic. It is a testimony to feminine power but most of all it is a tribute to the astonishing personality of Madame C J Walker.

Playwright, Theresa Roche, says: “RichMix is widely being hailed as the ‘new Barbican’ so I am delighted that this play is being performed in a venue that is becoming a world cultural centre for excellence across a broad spectrum of the arts, a place that invites the audience to explore and sample different cultures. This is so appropriate for the play ‘1867’ which itself is the result of an artistic collaboration between an Asian production company, a white playwright and a predominantly black cast “.

‘1867’ is directed by Bollywood actress, Saima Duhare who is also the founder of Palladini Productions a company devoted to producing high quality entertainment including theatre, short and feature films and television shows. The company has enjoyed great success in 2009 both with ‘1867’ and with ‘I’m a Londoner’ a show that featured in The Story of London Festival in conjunction with the Lord Mayor of London and that is scheduled to feature in The Moore Scoop Festival in 2010.