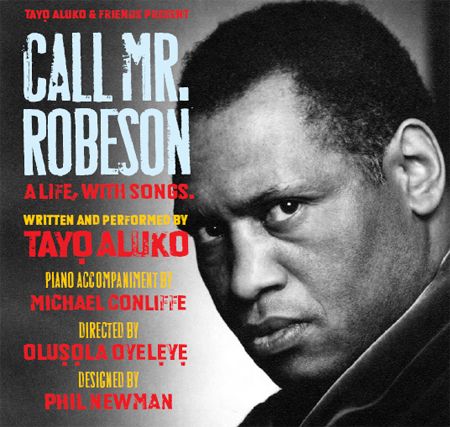 Call Mr Robeson, an award-winning one-man play about the famous African American actor, singer and civil rights pioneer is to be performed at The Old Town Hall Theatre, Hemel Hempstead, on Saturday 25 September 2010. The play has toured around the UK and in America over the last few years, and has recently had a triumphant showing at the world famous Edinburgh Festival Fringe, where it received multiple 5-star ratings. Previously, it had picked up the Best Male Performer award, an Argus Angel Award for Artistic Excellence, and was nominated for Best Show at the Brighton Festival Fringe in 2008.

Aluko, who first learned about Robeson when a lady told him that his voice reminded her of the great singer says, “I’ve had a look at The Old Town Hall’s programme, and it is clear that they have top quality acts appearing there, so I am delighted to be performing. Call Mr. Robeson there. I love introducing Paul Robeson to a new generation and also hearing people who were previously acquainted with him say that my performance makes them feel they are back in his presence again. I can’t wait to share his story with the people of Hertfordshire!”

He will be accompanied on piano by Leeds-based Michael Conliffe, jazz pianist and teacher, who has also performed in another musical play about the great Billie Holliday.

Call Mr. Robeson has been awarded 5 Stars on no less than six occasions by Fringe festival reviewers. One enthused: “I struggle desperately to find words that can truly express my feelings for this production and as such, I urge you, from somewhere within me that I haven’t been in touch with for a long time, to go and experience it for yourself.” (Three Weeks, Brighton Fringe 2010)

Another described the performance as “Never less than utterly believable… stirring and moving.. a comforting and entertaining journey” (British Theatre Guide, Edinburgh Fringe 2010),

The Scotsman’s Reviewer thought the story “Simply-told but immensely powerful…helps to restore [Robeson] to our collective memory, with great grace.” (Edinburgh Fringe, 2010)