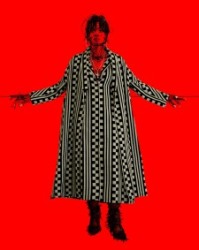 David Knight from St Vincent is the designer and senior lecturer in art & design at the University of Central Lancashire.

An illustration by designer and senior lecturer in art & design at the University of Central Lancashire, David Knight, is about to be published in a book featuring the best contemporary fashion illustration from around the world. The book, titled Big Book of Fashion Illustration, by Martin Dawber and published by Anova Books, is described on Amazon as: David’s drawings are created without paper and pencil. All are developed digitally by drawing straight into a computer.

In October, 2006 David was featured in the media when he had two works selected for the Liverpool Biennial: International Festival of Contemporary Art’s first online exhibition of digital art.
View Digital Show image

Earlier this year he had work selected for the Futuresonic 2007: Urban Festival of Art, Music + Ideas, for their online exhibition.

David says “My digital drawing came from a process I developed to help African fashion design but this has grown into a whole new area for me. African traditions giving birth to art for the new millennium!”

David, from St. Vincent in the E. Caribbean, is committed to developing African peoples design. In addition to teaching at the university he is also chair of Lancashire’s leading African peoples organisation, the Nguzo Saba Centre, Preston, and is currently working with young African heritage designers in both Preston and Liverpool in recognition of the 200th anniversary of the abolition of the slave trade. “Slavery did so much to destroy and disguise the African cultural heritage. We are helping to build new creative talent in this country from a rich and diverse cultural heritage!”