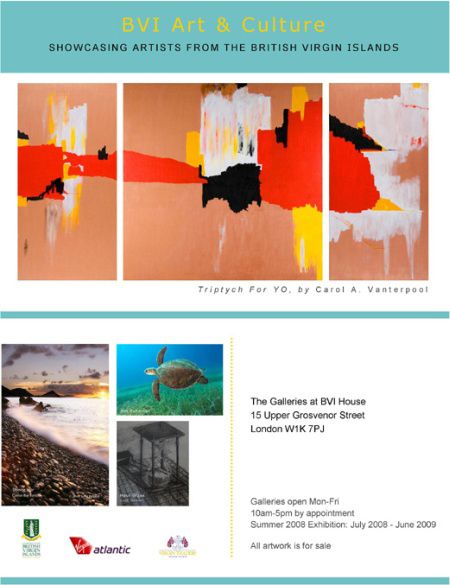 Demonstrating that the British Virgin Islands (BVI) are not just about palm trees and financial services, four leading artists from the islands are bringing their work to London in July hoping to make an impact on the London Art scene, and attract international collectors to their work.

Already critically acclaimed in their own country as well as the rest of the Caribbean, the artists’ work to be exhibited in the galleries of BVI House in Mayfair, London, will be a culturally diverse show of images from both landscape and underwater photographers, detailed pencil sketches and abstract paintings in both oils and acrylics.

Cofounder of the BVI Artists Guild and a participant in this year’s show, Carol Vanterpool is both an abstract painter and photographer. A long time interest in historical architecture led to a degree in architecture from Catholic University in Washington DC. Although this is the subject matter of her photography, her abstract work in oils and acrylics is a leap beyond line and form, where she expresses that freedom is wild bursts of Caribbean colours such as oranges, golds and reds. Her ‘Triptych for Yo’ is a 4 by 8-foot piece comprised of three brilliantly splashed panels that flow in a bold interconnecting statement.

Underwater photographer Jim Scheiner has been capturing marine life in vivid unforgettable images for the 30 years he has lived and worked in the BVI. His compelling photographs have graced the covers of numerous magazines both in the BVI and abroad and have become a photographic record of the ever-changing reef life in the islands. Scheiner’s photographic pieces for this show are printed on 20 by 30 inch canvases in wrapped frames. His panoramic shot of the bow section of the RMS Rhone, a British mail ship steamer that sank in BVI waters during the epic hurricane of 1867, combines both British and BVI history in a stunning underwater legacy.

The detailed pencil and charcoal sketches by BVI artist Gath Hewlett cover a range of subjects from portraits of well-known figures to sketches of animals indigenous to the BVI such as the Anegada iguana. Self-taught in his field, Hewlett originally born in England, but raised in Jamaica and the BVI, has been perfecting his drawing skills for years. He contributed one of the panels to the famous ‘Cultural Wall’ on Tortola, a series of paintings depicting early BVI life. A piece he is showcasing called ‘Hour Glass’ is a tribute to Hewlett’s inspirational mentor M.C. Escher, who he considers ‘his hero.’

BVI landscape photographer John Black has been documenting nature through his lens over the last 12 years. The uniqueness of his photographic work is his ability to capture the way light reacts to the landscape. His images are taken in what he calls that ‘magic time’ when light is first breaking at sunrise or waning in the soft light at sunset. The ‘Light in the Landscape’ series includes ‘My Diamonds in Disguise’ a brilliant play on light bouncing off smooth black stones by the shoreline. His stunning panorama of Road Town is a composite of 12 photos digitally constructed in one unending 54 by 16 inch panel.

The opening reception and private viewing of the BVI Arts and Culture show is on July 1st at the gallery location on 15 Upper Grosvenor Street in London. The public is invited to see the show by appointment, which will be on display at the Galleries at BVI House through June 2009.

All works are for sale.

2008 is 10th anniversary of the BFM Festival