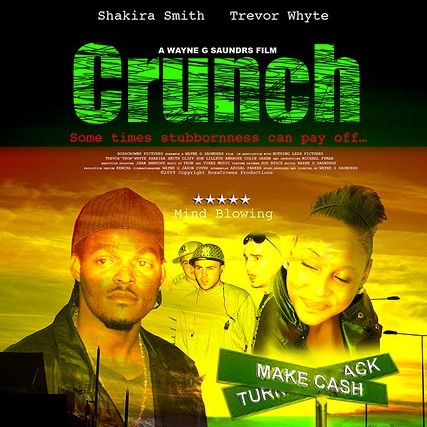 Crunch was premiered in Jamaica as part of the Reggae Film Festival with a UK premiere to follow with plans of distribution. Not bad for a film that only took a few week to film and edit.

Wayne G Saunders is causing a stir in the industry, and he penned the script for new movie, Crunch, in just a couple of hours! “Then I handed it over to the screen writer (Abigail Parker).” the film – maker told Scene.

“London Town can be a fair lady, but these days, the grind of every day life? It’s mostly dirty. Times are hard, but so much harder for T-row – arriving from Jamaica to make his dreams come true. But the Crunch bites – harder than T-row can handle – beaten up, homeless, with a fledgling romance to balance and a career to forge, can he overcome what has happened to him and regain control?”

Writer, director, producer and editor Wayne G Saunders (From Jamaican parentage) has won awards from the BBC, ITN and Production Base. He features in the British Film Institute book ‘Teaching Black Cinema.’ He has developed an innovative editing style…” Wayne G Saunders founder of BossCrowns Productions gained fame within the British film industry with his short film ‘Girls & Knives’, which was aired on ITN News to over 5 million viewers. BossCrowns Productions independent films have been shown in cinemas across the UK and Europe. Wayne’s drama and film production workshops have trained and mentored over 1550 participants around the UK.

From an early age Wayne G Saunders was brought up around the surroundings of the media. His father a photographer and his mother worked as a journalist for a small publishing house and studio. He spent many hours in this environment. Wayne studied TV, Video & Film production at the Brits Performing Arts & Technology School, and went on to work at Channel One as a Camera operator/director.

Despite his youthful age Wayne has done extensive work with, ITN, BBC, White Noise films to a digital editing course at VET, Channel Four, N Productions and IC3 TV interactive, The National Film School, LWT, Four Corners Films & OR Media just to name a few. Wayne has a BSc Hons in New Technology and Media communication and a MA in Screenwriting and Producing.