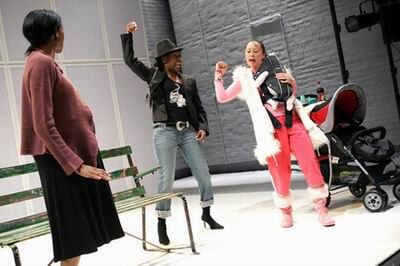 Fabulation by Lynn Nottage: The Re-education of Undine, a review by Dzifa Benson

Lynn Nottage’s Fabulation: The Re-education of Undine ran from 20th February to 18 March at the Tricycle Theatre and was directed by Indhu Rubasingham. It was such a hit that the theatre has cleared space in its schedules to bring it back for another short run between September 11 and October 9 2006.

Undine Barnes Calles, a very successful and neurotic publicist in New York, finds her fabulous life falling apart in one fell swoop when she learns that her husband Herve has left her, absconding with all her money, discovers that she is pregnant with his child and loses her social standing.

This premise sets the stage for Undine’s comeuppance – with no money and no friends, she is forced to return to a home and family in the Brooklyn projects that she left behind 14 years ago and has not seen since. Once she is there, she is busted by the police scoring smack for her supposedly diabetic grandma and thereby forced into group counselling and having to negotiate the maze of social services.

The play has familiar themes – self discovery and redemption through a fall from grace. However, all credit to Nottage’s writing that the hefty subject matter is handled with a light touch and no undue preachiness, setting it apart from other earnest, hand-wringing plays that deal with similar themes.

Nottage casts a sharply observant eye on all her characters, taking no prisoners and revealing their flaws and foibles regardless of race or class. This makes for a very funny and pointed comment on the consequences of self-deception and mindless social climbing. Jenny Jules as Undine, leads a lively cast in bringing Nottage’s acid satire comedy to exuberant life.

Much has been made in reviews in the British broadsheets about how the themes that influence Fabulation are surprising to be found in members of the ‘black community’. As if black people are not affected by all aspects that go to make up the human condition. I say that you could replace all the characters in Fabulation with white characters and still come away with the same feelings about the play. This is a play set amongst black character but the race of the characters isn’t the pivot on which it turns.

Fabulation is a highly entertaining, thought-provoking piece of theatre that rings true on many levels and will leave you on a high for days to come.

Lynn Nottage’s Fabulation: The Re-education of Undine ran from 20th February to 18 March at the Tricycle Theatre and was directed by Indhu Rubasingham.

Due to popular demand Fabulation will be coming back from September 14th to October 14th 2006 and that for the next month only there is a special early booking discount of 2 pounds per ticket.