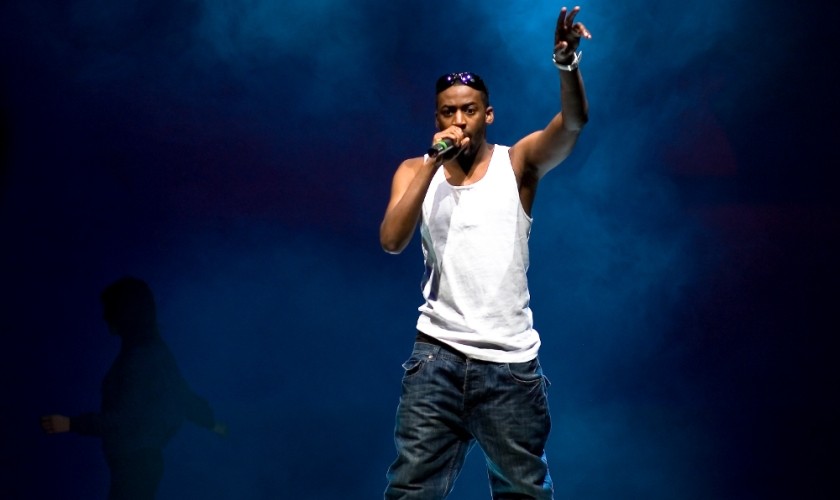 Ashley ‘Bashy’ in Markus The Sadist

Ashley ‘Bashy’ Thomas is back in the Jonzi D Production, the ‘intelligent’ and ‘funny’ Markus The Sadist. Paris de Bourgonniere catches up with him to find out more.

Markus the Sadist is back at the Bloomsbury Theatre this Spring, with Bashy playing ‘Markus Wright’ a talented emcee, making his name on the local battle scene. One night he’s spotted by a slick A&R from a major who sees Markus’s potential as a new addition to the label. He approaches Markus after the battle, bigs up his talent and promises that he can make Markus a major star, touring his music around the world and living the celebrity lifestyle with the cash to match. All Markus has to do is sign the contract…..

Ok, so first off, how was your transition into acting….have you always wanted to act?

So I guess you had that in mind from an early age then?

Yeah, I’ve always wanted to focus on it, but with the music, cuz you can be independent and I could do my ting, that’s what I did for a while, ya get me.

How did you manage to snap up the lead role for ‘Markus The Sadist’?

Well, I auditioned for the part, along with a few other rappers and actors, and they thought that I was the man for the part. Pretty cool man, they sat me down, and told me the vision and stuff and it worked. I liked it ’cause it sounded interesting.

What do you personally think about ‘Markus The Sadist’?

I think that it’s an exciting piece, that is definitely a reflection of the modern industry, and it’s got a lot of elements, like dance, Hip Hop and acting. It’s sick, really, visually. I haven’t seen anything out there like it.

Do you think the character Markus is anything like yourself?

Ok, more of a serious question, what role do you think that the media plays when it comes to glorifying the type of lifestyle youths of today are living, such as thug life/drugs and money?

Uuuuummmmm….well I think the media’s a very powerful tool anyway, you get what i’m saying? They can paint a picture of anything they want, good or bad, or over expose something, or under expose something. So I just think a lot of people’s careers rely on it, others depend on it and others are destroyed by it. The media works both ways.

How do you think that you inspire young people that listen to your music?

I think that I inspire people talking about my journey as honest as possible I think that they can relate to that. I talk about varied subjects….its honest music, ya get what i’m saying?

So…give me a perfect day in the life of ‘Bashy’…

A perfect one…….talking to Paris, that would be a good start…..! oh, and a good breakfast…..that is essential to my life! But not like a fried breakfast, I mean like an omelette, you know like, when it’s just made with egg whites, and it’s nice and healthy (sings) ‘ya get me!’ Then, I’ll check my emails and get some good news, find out that a couple of projects have gone through, that would be quite good for me…..i’ll write a banger….

For all the ladies out there…. Are you seeing anyone at the moment?

I’m seeing music at the moment. You know….but I’ve got friends…..

But nothing serious at the moment, no?

Where would you like to see yourself in the next 3 years?

Definitely in a much stronger position, and just to be moving really. I am in a very strong position at the moment, just by my acting popping off.

Have you got any other projects in the pipeline?

We will be looking out for that!