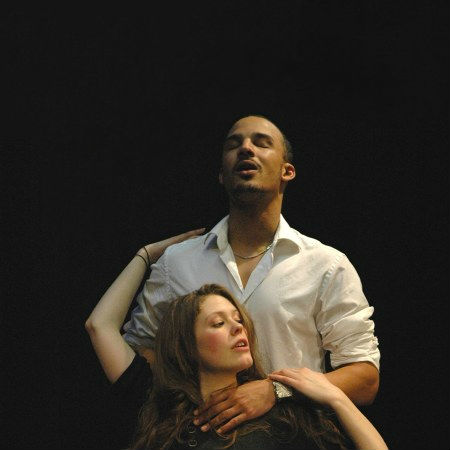 Lazarus Theatre Company returns to the Blue Elephant with another reworking of a classic text following The Duchess of Malfi (radically revamped to end dramatically at her death) and Julius Caesar (without a Caesar!) in 2009.

Shakespeare’s epic story of love, betrayal and jealousy, Othello starring Alec Parkinson will be brought to the stage by an ensemble company of fifteen actors, using Lazarus’ signature style of combining text with movement and music.

Othello, General to the Duke of Venice, is commissioned to drive the invading Turkish fleet from Cyprus; his embodied love and passion for wife Desdemona is driven to ultimate destruction in a war for freedom, survival and pride.

Alec Parkinson (Othello) graduated from Central in 2006 (MA Classical Acting). His theatre credits include Romeo in Romeo & Juliet (The Space), Errol Philander in Statements After an Arrest Under the Immorality Act (Lion and Unicorn), and he was in Jonzi D’s Aeroplane Man in 2001. His commercials and viral ads have included WWE 09 Sponsorship, Nike – Lace Your Feet Up and an NHS anti-smoking campaign.