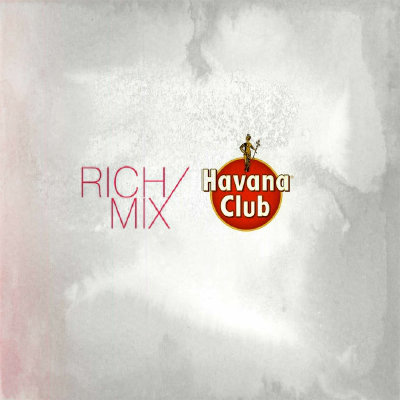 South London urban artist Remi/Rough has been commissioned to design and paint an interior wall in Rich Mix as part of a twelve – month project encouraging amateur or professional artists to submit their interpretation of humanity, spontaneity and creativity – embodying the unique and inspiring attitude that reflects the true values of the Cuban capital.

Open as a competition, artists are invited to submit their entries to a panel of experts, led by Remi/Rough, who will select two winning designs to feature on the Rich Mix interior wall throughout the year.

The project celebrates Rich Mix and Havana Club’s shared ethos of inspired ingenuity for creativity while nurturing new and emerging talent. The unveiling will be hosted in conjunction the launch of Rich Mix’s new season of cinema, live music, theatre, dance and visual arts. The Cuban – inspired free launch event kicks off from 7.30pm and will include live music from Katy and the Mamboleros, the London Lucumi Choir, and Movimientos DJs.

Entries should be submitted to Rich Mix (visualarts@richmix.org.uk) and a selection will be posted on the Havana Club UK and Rich Mix facebook pages to invite public feedback. Entries must be submitted by:

• July 2 with the winning wall design on show from July to September 2011.

Havana Club is the second largest international rum brand in Europe, and third largest worldwide. Key to Havana Club’s success is its authentic Cuban origin, and the recognised quality of its rums, all of which are aged, hence the use of the word ‘Añejo’ – aged on the bottles.