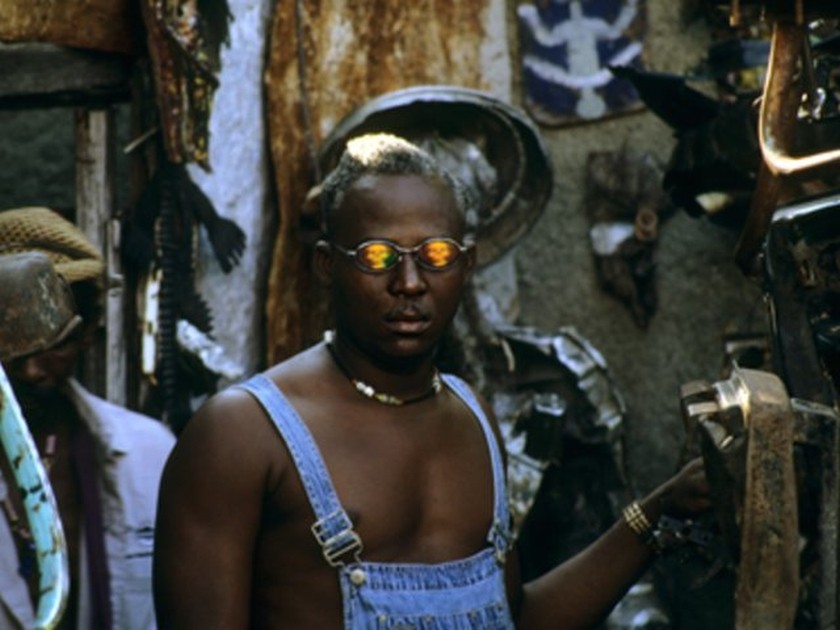 Photographer and documentary maker, Leah Gordon explores the work of a group of artists whose work is breaking the mould of Haitian art and sculpture.

The Gran Rue in Port au Prince would evoke a bête noir like response from anyone who is familiar with it. But as with many indigent communities world over, a lack in material wealth does not hinder its creative spirit. A male collective of artists in the crook of the shanties have integrated used goods into the creation of their artwork. These recycled items not only reduce pollution but develop into grandiose objects, which communicate various themes including sexuality, self-determination and vodou traditions. Artists use their imagination and the recycled items which include but are not limited to metal, iron and dolls to deliver their message to the world.

This has been brought to London through Leah Gordon whose first encounter with the artists was through her assignment by the International Slavery Museum in Liverpool to find a piece of Haitian work to become a permanent member of the exhibit. That journey gave birth to her documentary titled, “Atis-Rezistans: The Sculptors of Gran Rue.” Throughout the documentary the artists’ discuss how the vodou spirits influence their creative process. They also emphasize that those who live in Gran Rue all possess inventive artistic sensibilities. One salient feature is a crafty piece where one of the artists used second hand shoes transported to Haiti from abroad. The shoes, unequivocally inappropriate for the island’s tropical climate, go unworn and add to the mounting rubbish.

The sculptor used the shoes to make a political statement, “Why not produce our own shoes in our country?” It was noted by Ms. Gordon that the artists’ work had been sabotaged by incendiary acts on more than one occasion by fellow Haitians who are anti-vodou and view their sculptures as nonsense. Other challenges include not being able to attend invitations for their work to be presented in the U.S.A. because said country refuses to issue their visas. They are also ignored by the mainstream purveyors of art and culture in Haiti. Nevertheless, they have travelled to other countries to showcase their work and they do receive visits from tourists who read about their models in Caribbean holiday magazines.

The candour of the sculptors of the Gran Rue is enveloping. Like their contemporaries globally they use visual images to capture their reality. A reality that for some may be confusing and often times misunderstood but it contributes significantly to the cultural eco-system. Their work provokes debate with its complicated and sincere ideas. The Gran Rue collective are an unrepentant iconoclastic force whose vision leaves one eager to seek out more.

Atis-Rezistans: the Sculptors of Grand Rue from Leah Gordon on Vimeo.

To find out more about the artists or the documentary contact Leah Gordon via her website: www.leahgordon.co.uk.

Similarly, one can see a sample of the sculptures of Gran Rue at the International Slavery Museum in Liverpool.
Leah Gordon’s pictures of Jacmel Carnival in Haiti will also be shown at Galerie 64b – opening on 28th May 2009