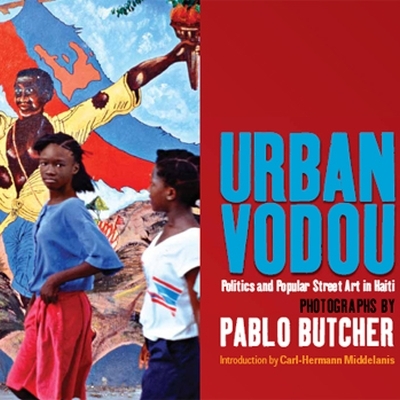 From 1986 to 1994 the Caribbean nation of Haiti experienced a series of dramatic events: the overthrow of ‘Baby Doc’ Duvalier, the violent disruption of voting, the overwhelming electoral victory of Jean-Bertrand Aristide, a coup d’état and a US-led military operation to return Aristide to power. Even by Haiti’s standards, these were exceptional episodes in a long history of political instability and social unrest.

The world’s media chronicled Haiti’s turbulent trajectory through newspaper articles and news films. But perhaps more importantly, Haitians themselves reacted to the cycle of hope and despair that made up their daily lives in the form of hundreds of spontaneous street murals.

Mostly in the capital, Port-au-Prince, these colourful and expressive paintings both recorded key events and articulated the hopes and fears of their creators. Some targeted the fallen Duvalier and his henchmen, others the military regimes that succeeded the dictatorship. Many were later produced to celebrate the triumph of Aristide and his lavalas movement, while in 1994 a ‘third wave’ arrived in the wake of the UN-sanctioned invasion by US forces.

Haiti’s popular murals mix a vital sense of the contemporary with more timeless themes and motifs. Drawing on a distinguished tradition of ‘naive’ art and produced by artists from many different backgrounds, they are rich in allusions to Haiti’s revolutionary history, record of anti-colonial struggle and attachment to Vodou. Inspirational leaders such as Toussaint Louverture, Dessalines and Charlemagne Péralte appear in these images, as do the Vodou deities Ogou, the iron warrior, and Ezili, the goddess of love.

Alongside Christian messages of martyrdom and redemption, the paintings invoke the Vodou rituals of sacrifice and spirit possession. With extensive symbolism and visual immediacy, they also mix elements of local and foreign culture – the country’s emblematic fighting cock and Goofy, for instance – in a way that typifies Haiti’s vibrant Creole culture. Captured in 146 full colour photographs by Pablo Butcher, these murals – many of which have now disappeared in the earthquake of January 2010 – tell in vivid terms how Haitians saw their unfolding political drama, and literally imposed this view on their urban surroundings. Pablo Butcher is a photographer living in France and a frequent visitor to Haiti.

“Pablo Butcher opens a window on to the rackety exuberance of street art in Haiti. With startling immediacy his photographs capture a surreal, fairground gaudiness and harlequin carnival of colour. In these great folk murals pulse the fantastical angels and demons of Vodou; sacrificial roosters, trumpeting angels, mermaid-tailed divinities, and Napoleonic freedom-fighters in their frock coats. As human chronicle and tribute to a great people, Urban Vodou is matchless.” – Ian Thomson, author of Bonjour Blanc: A Journey through Haiti

“These murals have aroused almost the same level of interest as Haitian popular painting did in the 1940s. They have been documented mostly by foreigners, notably by the English friend of Haiti, Pablo Butcher, whose photographs have appeared in many exhibitions. His visual record is all the more important as the murals themselves were by necessity condemned to a short life.”
Gérald Alexis, former director Musée d’Art Haïtien and author of Peintres Haïtiens

The Price of Sugar Documentary