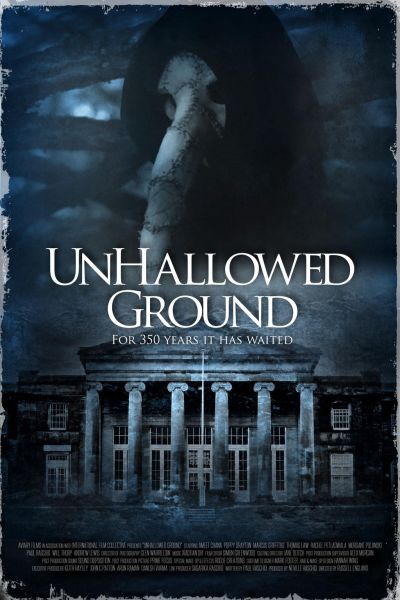 In recent months there has been much discussion of the lack of diversity in British media with many big industry names joining the call for the inclusion and promotion of BAME talent particularly in cinema and television. A perfect example of the host of emerging ethnic minority talent in the UK is independent supernatural-thriller-horror Unhallowed Ground. Already receiving rave reviews on the horror circuit, Unhallowed Ground features a talented and diverse cast and crew of fresh talent.

Already garnering industry praise and securing Kaleidoscope Home Entertainment as its UK distributor and Jinga Films as its international sales agent, Unhallowed Ground has also been selected for the London Independent Film Festival which runs from 16th – 27th April. The film will be screened at Shortwave in Bermondsey on Friday 24th April during the festival. The film has also been selected for the British Independent Film Festival which will take place on 24-25 April at the Empire Cinema in Leicester Square. It will screen at 4pm on Saturday 25th April.

ABOUT THE FILM
Set in an historic British boarding school six students from two prestigious single sex private schools, spend a night patrolling the grounds of the historic Dhoultham School as part of their Army Cadet training. As each hour passes and the teenagers complete their mundane tasks, they witness a series of increasingly disturbing occurrences: slamming doors, flickering lights and ghostly apparitions.

As the hours grind on, personal conflicts are magnified and the school’s gruesome history erupts with deadly consequences. Meanwhile, the ante is upped by two brazen burglars who have chosen this very night to carry out a heist on the school archive room – a vault of priceless historical documents and artefacts. As the supernatural encounters begin to take an increasingly malevolent turn, the students realise they must escape Dhoultham before the night’s end.

Delivering thrills at every turn, Unhallowed Ground is a smart, slick thriller which slots nicely into the teen horror genre in the vein of Scream and Jeepers Creepers. With realistic characters that never succumb to tired tropes or flat stereotypes, Unhallowed Ground is a breath of fresh air in an industry starved of diversity and multi-dimensional characters of colour.

Young writer Paul Raschid comments on the inspiration for the script and his first fully fledged feature film: “As a child of the 90’s, shows like Scooby Doo, Goosebumps and Are You Afraid of the Dark? featured prominently in the make-up of my viewing habits. Naturally, this nascent taste for a darker brand of onscreen entertainment segued into watching full-fledged, ‘grown-up’ horror feature films. So it’s truly been a lifetime’s mental stockpiling of influences that shaped the script of ‘Unhallowed Ground’. Primarily, I wanted to write a horror film with believable characters so that the audience would care whether the people on screen lived or died as I find such an emotional attachment makes every scare or moment of tension that bit more intense.

“The ‘Scream’ franchise has been a huge source of inspiration as I love the youthful wit and nimbleness of the writing. I’m also a huge fan of the recent supernatural James Wan/Blumhouse horror films for their atmosphere and tone. With these two particular influences in mind I wanted to create a twofold human and supernatural threat to our protagonists. Thus posing the question, which is actually to be feared more? The stuff of ‘make believe’ or the very real human capacity for brutality.”

Unhallowed Ground will be released on selected screens across the UK on 12th June 2015, followed by the online and DVD release on 29th June and 13th July and the film will be introduced to foreign markets at Cannes 2015.